Share All sharing options for: New Uniforms - One Big Problem

The NHL has been kicking around the idea of a new form-fitting jersey for teams to start wearing on the ice. The idea was origiated by the supplier of said uniforms, Reebok. Along the way, they also came up with some prototypes - the first of which will be viewed during the All-Star game as the game's best players (and Rory Fitzpatrick) will be decked out in streamlined, formfitting unis.

I'm not a huge fan of "that's the way we've always done it" in life, work or hockey, but in this instance, I'm not a fan of tinkering with the classic uniforms. Inspired by the harder-to-grasp uniforms of NCAA and NFL football, these new togs should cut down on the grabbing and pulling, but to me, there is little that compares with the beauty of a pro hockey player flying downice and cutting back and forth, jersey fluttering in the wind.

Maybe seeing the real deal will change my mind, and at the very least it'll get me to tune into the uber-boring All Star game, but I doubt I'll be converted.

Here is the Reebokized Blues jersey: 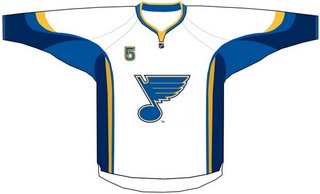 Which isn't terrible. But I'd argue that short of the 1998 era brassy trumpets jersey (one of which I own) it's hard to dick up that classic Bluenote and the colors of blue and gold the team uses.

But I have a practical reason that the owners should reject these new "form-fitting" jerseys. Look around the rink next time you're in the CheckettsDome. How many of the people that are wearing jerseys do YOU want to see wearing something "form fitting"?

Seriously, unless the teams want to see a serious dent in their merchandizing revenues, they'll veto the new skin-tight togs. How many fewer jerseys do you sell if your fan base loves nachos and philly steak sandwiches and beers and beers and beers?

How many guys like this do you think will be buying "form fitting" gear? 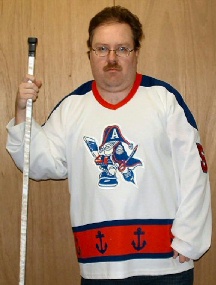 And if this Oiler fan (nice respect for the flag, by the way) does, I'm saying we ban him from the rink:

However, I'm willing to make an exception to my stance on "No Tolerance" if a few more fans hit the Bowflex and start looking like hockey fan Elisha Cuthbert: