Joe McGrath, the general manager of the fictional Charlestown Chiefs, was famous for his shitty PR schemes. Having the players make radio appearances and model at fashion shows to drum up interest was a way of life for cheap ol' Joe McGrath. 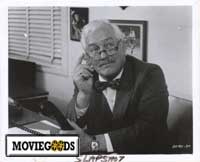 The Blues, on the other hand, have had a long history of good PR schemes. Led by former VP of Marketing and Communications Jim Woodcock, the Blues won awards and fans with their PR schemes. "Do You Bleed Blue?" was a solid campaign that generated excitement about the team and focused attention on the die-hard Blues fan.

I remember going to games and seeing people wearing bloody blue bandages as part of their game-day attire. I saw a girl who had an IV bag full of blue fluid attached to her arm. I don't know how she managed that, but the campaign clearly worked for her. And for a lot of other fans. The Blues have spun off of the Blue-Bleeder theme for a few years now and maybe that's why they felt it was time for a change. New team, new management, new fresh motto and ad campaign.

I can buy that.

What I can't buy, however, is the stupid idea they came up with instead. The Blue Revolution concept is fine. Show me an army of rabid Blues fans. Play Twisted Sisters', "We're Not Gonna Take It" if you must (and I assume that you must). Give me some manifesto (or fanifesto, if you insist). I can deal with all of that. Some of the commercials could even be good if executed properly.

What I don't want is the phony supposed-to-be-underground Blue Revolution crap that they went with instead. Commercially produced to look like they are DIY banners flying from City Hall and the "Your Name Here!" Center. The same professionally designed to look primitive banners tied over regular billboards along the major highways. Planned and taped fake interuptions of Blues press conferences.

Here's why I am fine with the concept but hate the execution: it's condescending.

Not only is it treating fans like idiots, it's treating fans like we're gullible. Did anyone believe that the billboards were acts of Blues fans for even a second? I hope not. The faux-crashing of the press conference was so clearly staged as to be embarassing.

And it's not just that I think it's condescending, I know it's condescending. Confirmation comes straight from the latest post on the Blue Revolution's blog. I'll excerpt it to keep you from wasting time on their website:

So, many of you Sherlock Holmes super-sleuth Blues fans have figured out that the Blues are actually the ones behind TheBlueRevolution.com. Congrats. Gold star for you. I canâ€™t imagine what couldâ€™ve tipped you off. Was it the â€œCopyright Â© 2006 St. Louis Bluesâ€ line at the bottom of every page on the web site? Or, maybe it was the link on stlblues.com. I just donâ€™t know how you did it. Oh well, our Da Vinci Code has been cracked. Weâ€™ll have to deal with it.


If that opening paragraph doesn't tell you immediately that these guys are looking down on their audience, then I don't know what else I can do to convince you.

So I guess what Iâ€™m saying is this. While I was hired to do this, I AM STILL A BLUES FAN. I would have done it for free.


Is that right? Then why didn't you do it last year? The cry of the paid professional whose work isn't being heralded as the Revolution you'd hoped for. I no sooner believe that this guy would have done it for free than I believe this campaign will be winning any awards this year. You know why? Because WE did this for free last year!

My staff missed sleep, spent hours watching a team that precious few people seemed to care about and slaved to bring a voice to the fans of the St. Louis Blues. And we all did it for free. Don't let the stories of all the GT staffers buying matching Lexus luxury sedans sway you. We're all working stiffs who do this paper because we love it and we love our team. So when a paid employee tells me that

1) I'm a genius for knowing a shitty PR scheme when I see it
and
2) He'd do the same thing even if he wasn't getting paid,

don't be surprised when I get a little bent.

And to top it all off, the ad agency has posted a load of crappy 'viral' videos on the site to show how hardcore they are. Trust me, the only thing viral about these is that they might actually make you sick. I mean, for chrissake:

Great. Thanks a lot. Now we have to live this down for, well, forever. If I were Pearl Jam, I'd slap a 'cease and desist' on this hunk of cheese and make him take down our poster.