Vague enough fer ya?Â Friday night and the inmates have taken over the GT HQ. In other words, it seems someone slipped a heavy dose of chocolate to all the minors in this house. We'll be updating as possible, with possible guest blog appearances from our own superstars Brad Lee and Marcus Pettersson. 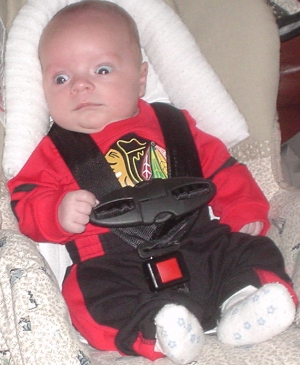 We don't want to overstate things, but it'd be pretty neat and fairly helpful if the Blues would be so inclined as to get a victory tonight.

However, when the pre-game graphic shows "Mayers" on the top line, it makes us less than optimistic. Unless of course there's another Mayers out there who doesn't consistently miss the entire net with 85% of his shots.

In a related note, if we were shaking up the lines, we'd be shaking the bottom three lines like a money tree, not the top line.

Â Weight and Stempniak anyone?

16:01: Let me get this straight; the Hawks have Sergei Samsonov, Marty Lapointe, Andrei Zyuzin and a past-his-prime Nik Khabibulin... and they are ahead of the Blues in the standings? Where's the justice?

Then again, we are using Mayers on the top line, so...

13:43: I choose not to investigate all the screaming in the dungeon basement of the GT HQ. I know I heard someone scream out the word, "poop!" That sounds messy. I'm sure nature will take its course.

13:02: Seeing Kane and Toews for Chicago makes me wish we had Oshie in the lineup. It also makes me wish the Blues had been able to flip all their 1st round picks last year for the one the Hawks used to select Kane. I will never ever admit this again.

11:10: Â Seriously, no one is allowed to even think, "Man-ny! Man-ny!" Another big save on a crazy close-in deflection off of Weight's skate. Hey at least Dougie's getting pucks on net again.

8:19: OK, there's no fire in the basement, but something was definitely on fire in the not-too-recent past. Oh, and the Blues scored while I was gone. Sounds like the broadcasters are either bored with a PP goal or they're unsure of what happened.

5:02: Trusty NHL.com gives me what I want: Wagner with his 2nd goal, assisted by Perron and Dutchie Stempniak. Whoever scouted the University of Minnesota-Mankato deserves a raise as both Wagner and Backes came from that hockey factory.

First comment of the night, from our favorite Swede, Marcus Pettersson. The kid is probably just completely freaked out that his parents want to make him a Blackhawks fan. It's like your parents wanting you to be a fan of automobile accidents or something.

3:20: Hawks tie it up. Remember what I said about Kane? Yeah, now it's starting to hurt.

2.Â Experiment over - Put the big line back together, followed by Weight-Perron-Stempniak and McClement-Rucinsky-Mayers.

3. If the Blues lose this game, something around here is getting broken, I just don't know what yet. Yes, I'll take pictures.

Intermission: Blue Note Code commercial. Umm, how come all the guys talking about how "good is the enemy of great" are all of the Blues' good, but not great, players? Does that mean they're the enemy of Boyes and Kariya? I must be missing something.

Oh, and good night to our friend in Sweden. I guess all I have for now is our lone Blackhawks fan to antagonize. Of course, his site Kill Bill Wirtz is pretty sweet, so I'll try not to be a dick. Much.

Start of 2: I tried calling Andy Murray with my line suggestions. I could not get through.

Unlike the Hawks, who just got throughÂ .32 nanoseconds into the period.

16:42: Barret Jackman has had a rough couple weeks. He's doing his best Eric Weinrich impression by making sure he's always the guy you see when the other team scores. That said, I still like his game and would love to see him stay a Blue, but his contract situation combined with the Blues spending $8 mil a year on McKnee and B(roken)rewer, it's gonna be tough to keep him around. You just can't spend $14 million a year on three blueliners today. Anyone's thoughts?

14:09: Somewhere in the bowels of GT HQ, a child is crying like bear just tore her arm off. I'm off to investigate, so expect something big to happen.

12:20: Still completely armed, the child was apparently (very) upset about something to do with walnuts, an old car or some sort of cheese. She also informed me that reseon it stinks is that she "burped some poopy". Weirdly discriptive.

In Blues news, it seems like the Note are in big trouble. They're just hanging on as wave after wave of talented youngsters and burned out europeans assail them. Hey look! Kariya is there! I had no idea.

PP Goal! David Perron, I now believe in you. Wicked shot from the circle even if it was Lalime in net. ThatÂ shot beats most goalies.

1. Switching from beer to much more beer effective immediately.

2. Blues don't deserve to be in this game and yet they are. That's the exact opposite of the usual, where they let teams hang around and hang around. We hope our Blackhawk friend is right about his team collapsing in the third.

3. The Code hates good, but what does it think about lucky? Because with a little luck, the Blues might get out of this.

Kerber's voice:Â Prospect Dept, the McRib is back and Kerber is probably just in some sort of overload situation there. Dude overbuys and puts 'em in the deep freeze so he can have them after their limited engagement is over. Not that you heard that from me.

Start of 3. If there was anything worth commenting on in the first 5 minutes of this period, it would be here.

13:50. Cheese and Rice. Jamal Mayers and his "Wide Right" shooting is funny, but not that funny. How do you go three feet wide on a shot when your toes are touching blue ice? Unreal.

12:50. The Hawks are now actually attempting to give the game away. Blues on the PP.

12:30. Either that or they just think they're most dangerous when Patrick Sharp is on the PK. Yet another shortie chance for that guy. Two goals shorthanded last Saturday, a shortie assist tonight... this guy is the Duncan Keith of Blackhawks forwards.

11:50. Juvenile, I know, but it makes me laugh when John Kelly is talking about a guy getting "doubleteamed on the wall". JK is into some nasty shizznit!

9:19. I don't usually get too worked up about referee calls, but the Wagner for Interference call was ticky-tack at best. Only one of those two statements are true. Blues have 2 minutes to completely shit this game away.

5:29. Kariya and Boyes have been invisible for most of this game. Expect a heavy dose of Weight and Perron in the last 5 minutes, as they've been the best only forwards out there tonight.

4:00. Boyes-Kariya-Tkachuk together again. Too little, too late?

1:23. Empty netter set up by Kane. Assist to Tkachuk for a poor pass into the middle of the ice. Time to go find something to break...

2. I think I have a nice item for the smashing.

4. Listless is as listless does.