Future Nets: The State of Blues Goaltending, Part I

Share All sharing options for: Future Nets: The State of Blues Goaltending, Part I


[This article originally appeared in the Feb. 20 issue of Game Time.]

Goaltending has rightly been called the single most important position in hockey.Â A good goaltender can lift an entire franchise onto his back and carry them a long, long way.Â Itâ€™s no coincidence that goaltenders -- Ron Hextall and Jean-Sebastian Giguere -- are the only two players in the last twenty years to win the Conn Smythe Trophy while playing for the losing side in the Stanley Cup finals, nor is it a coincidence that the great Glenn Hall won his only Conn Smythe by backstopping the Blues in the 1968 Cup final vs. Montreal.Â

The Bluesâ€™ organization recognizes the paramount importance of this position and has built up impressive organizational depth in goal with free agent signings, trades, and draft picks in recent years.Â The Blues have so many goalies with bright futures that they havenâ€™t got enough places for the goalies in the system to develop at the level theyâ€™ve earned with their play.Â

Tonight and next Tuesday, weâ€™ll look at the so-called â€œgoaltending logjamâ€ in the Bluesâ€™ system, get the low-down on all of the Bluesâ€™ goaltending prospects and offer our view of one possible way for the Blues to make the most of their current glut of talented netminders.Â

The first issue is that there are three NHL-caliber goaltenders in the system right now and only two spots for them.Â The top two goalies on the depth chart, veterans Manny Legace and Curtis Sanford, were both free agents signed by the Blues since 2000; both have become fan favorites, and both have played impressively well in stretches.Â Legace has the edge in experience, and Sanfordâ€™s inability to stay healthy for a whole season may end up making him the odd man out.Â

From all indications, Sanford shot himself in the foot by turning down a three-year contract offer from the Blues last summer. He was gambling he could say healthy enough, long enough, to push Manny Legace into the veteran backup role and take over the number one job. Those things did not happen, and Sanford, God love â€˜im, just can not be trusted to stay off the IR long enough to go on a two-month run like Legace has done this year. Â

Former Dallas first-round pick Jason Bacashihua remains in the organization to provide insurance for the annual Sanford injury. From a practical standpoint, it just makes sense to eliminate the reason for the insurance policy by taking Sanford out of the equation. The fly in this ointment is that Andy Murray just does not seem to have any confidence in Bacashihua, but with Schwarz resting a strained groin, Bacashihua will have plenty of chances to show in Peoria that he can be consistent and be a â€œgo-toâ€ guy. Â


Bacashihua has historically been a guy who thrives on a regular workload. The 35 games he played for Worcester in 2004-05 were the least heâ€™s played in a season since his midget days; he played 41 and 39 games for Chicago of the NAHL in 1999-00 and 2000-01, 46 games for Plymouth in his only OHL season, and 39, 39, and 35 in three AHL seasons before last year. Â Game Time caught up with Bluesâ€™ goaltending coach Rick Wamsley at a recent Peoria Rivermen game, and Wamsley indicated that Bacashihua â€œis at an interesting age.Â He needs to take that next step for us and show us that he can be an everyday goalieâ€.Â Â
Peoria head coach Dave Baseggio has a similar assessment of Bacashihua.Â The first-year Rivermen bench boss notes that Bacashihua has â€œloads of talentâ€, but â€œneeds to establish himselfâ€ as a dominant AHL goaltender, and a legitimate option for an NHL starting job.Â Schwarzâ€™s injury may give Bacashihua the opportunity he needs to do just that.Â

Speaking of Schwarz, Both Wamsley and Baseggio have had nothing but high praise for the Czech rookie.Â Before tweaking his groin earlier this month, Schwarz came into the AHL All-Star Game with his team trailing by a goal in the third period, and kept the Canadian-born AHL All-Stars at bay to earn the win for the PlanetUSA All-Stars.Â Per the two coaches in the organization most familiar with Schwarzâ€™ abilities and potential, the best is yet to come. Â 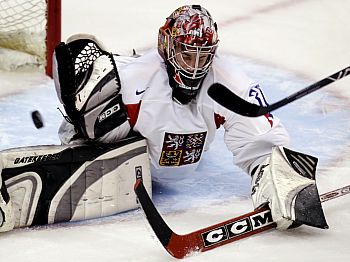 
Wamsley noted that Schwarz started the year in an impressive fashion, showing well at the prospect camp held at St. Louis Mills in July before traveling with the team to Traverse City for the annual Prospect Tournament hosted by the Detroit Red Wings.Â Â Â Â

â€œEverybody (in the organization) is extremely happy with the way heâ€™s progressed from Traverse City to nowâ€, Wamsley said.Â â€œHeâ€™s shown good patience, and the ability to work on his game.â€Â

Baseggio, who sees Schwarz every day in practice and game situations, is even freer with praise for his goaltender, calling him a â€œgreat kid with a good attitude, athletic and hard-workingâ€.Â Â Â Â

â€œSchwarz has a great demeanor and work ethic,â€ Baseggio continued, â€œHis quickness... he makes some saves where you canâ€™t believe he got to the shot.Â He has that quiet confidence in the net, and he knows how to win hockey games.â€Â

Last, but certainly not least in Peoria, is third-year pro Chris Beckford-Tseu.Â The 6â€™2, 200 Toronto native has been the primary victim of the numbers game in the Bluesâ€™ organization, havingÂ had to endure several assignments to Alaska over the last two seasons simply because there werenâ€™t enough available minutes at the AHL level for him to get the ice time he needs to develop.Â


Heâ€™s taken these assignments in stride, and has put up outstanding statistics while down at the ECHL level.Â Last year, while helping lead Alaska to a Kelly Cup championship, Beckford-Tseu was 16-1-2 in the regular season with a 1.87 goals-against average.Â

This year, heâ€™s been up and down between Alaska and Peoria, and while in the ECHL has appeared in seven games without a loss (7-0-0), and sports a 1.27 goals-against average and a glittering 95.0% save percentage.Â Heâ€™s also been showing steady improvement at the AHL level; in 14 games with the Rivermen this year, Beckford-Tseu is 8-4-1 with one shutout, a 2.31 GAA and a respectable 90.9% save percentage. Schwarzâ€™s recent injury has opened the door for Beckford-Tseu to get a little ore ice time in Peoria as well.Â Â Â Â Â

According to Baseggio, the Bluesâ€™ ninth selection (159th overall) in 2003 has â€œtons of potential, and a lot of good qualities.Â Beckford-Tseu is bigger, and not as quick as (Schwarz), but he covers more net.Â Â Heâ€™s a good, hard-working kid with a good skill set, heâ€™s dominated down below, and heâ€™s played well for us here this year, too.Â I think heâ€™s ready to take the next stepâ€.Â

In the next edition of Tomorrowâ€™s Bluesâ€, weâ€™ll look at the three goaltending prospects not playing in the AHL right now, and share some more of the insights of coaches Wamsley and Baseggio on the Bluesâ€™ stable of young goaltenders.Â Until then, check out archived columns and other prospect-related content, on the â€œFuture 'Notesâ€ blog at futurenotes.blogspot.com, and at www.stlouisgametime.com, and as always, remember... â€œif we do not prepare for ourselves the role of the hammer, there will be nothing left but that of the anvil.â€Â Auf wiedersehen.