To the man-child and his mother who sat in front of me tonight at the game.

Good sir, if you have decided to honor your mother's birthday by bringing her to the Blues game on Tuesday night, I commend you. Not since Homer Simpson presented his wife with a bowling ball engraved "Homer" has a man chosen such a well thought out and self rewarding present.

However, if I may offer a suggestion or two for the next time Mom gets a present of sitting next to her overgrown son in a junior-sized jersey sporting a bowlcut and full-blown "this will hide my double chin" scragglebeard for three hours while he swills both of the his-and-hers beers and spills nacho crumbs belly and yon.

1.Â Either spring for better seats down low or explain to her that in the upper decks she may be seated in front of a rambunctious six-year-old hockey fan who will be yelling almost directly at her head the whole time due to the physics of his height, his angle to the ice surface and the barrier of her slightly doddering head.

Because here's the deal: I will not silence my upper-bowl loving offspring from yelling, "Let's Go Blues!" whenever he pleases. That's the fun of being a hockey fan. It also dovetails nicely with the fun of being six years old.

Oh, and when his hand-made "Go Lee #12" sign brushes your mom's wispy/brittle hair, we will also not apologize. Welcome to a hockey game, madam, sometimes people will inadvertantly touch you. Trust me, he was not trying to rub some of your finely-honed "eau de old lady" onto himself magazine-sample style.

2.Â Explain to Mom when she gets up to leave with eight minutes left in the third, she should do so quickly. She doesn't seem to know thatÂ her patentedÂ look of disappointment and accompanying subtle head shake doesn't work on upper bowl denizens. I don't care if she disapproves. I only care that she's leaving and my kid can continue to scream all he wants.

Do me a favor, grown-up-baby-boy, and let her know that it only works on the children she has browbeaten, shamed and emasculated ever since she ejected them from her ossified and freezing cold birth canal all those years ago.

You know, the same type of kids who surprise Mom with two tickets to a hockey game she has no interest in seeing for her birthday.

Thank you for your time. Oh and one last message for Mom: 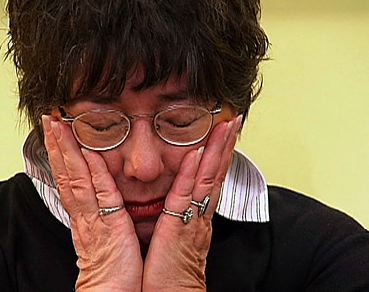