Share All sharing options for: Dallas Drake Put On Waivers 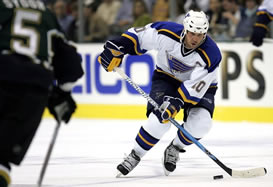 According to Stltoday.com, Blues captain Dallas Drake has most likely played his last game with the Blues after being informed Sunday that he's been put on waivers. While Dally has only topped 40 points once in six seasons with the Blues (during his first with the team back in 2000-01), he's been a good soldier for the team. And while some of us openly campaigned for him to retire at the end of this season, it's sad to see it end like this. According to his agent, Drake hopes to play for another team next season. We find that hard to believe, but whatever. Good luck to him and his family.

Â UPDATE!
According to the Post-Dispatch, Drake cleared waivers and the team plans to buy out his contract.