Share All sharing options for: Blues Brace For Bruins

Just when you think the Blues are completely out of it, they do enough on a cold Saturday night in December to remind you that this thing isn't over yet. Yes, we can be swayed that easily. 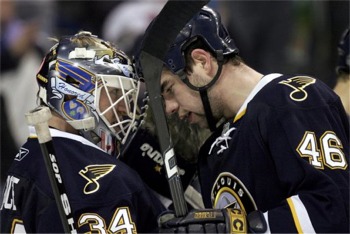 An impressive 4-2 win over the frisky Minnesota Wild last night does a couple things. Obviously it ends the Blues' five-game losing streak. Second, it shows the Blues can still compete with teams that have given them fits in recent seasons. If only some of the injured could return to the lineup sometime soon. It's almost a shame they have to play the second best team tonight, the Boston Bruins. Did I mention I hate Boston? Bobby Orr and his flying Superman Cup-winning goal can suck it.

The Blues beat the Wild Saturday night by doing a couple of things they rarely do these days. For starters defensemen scored a goal and three assists. I could try to look it up, but I'm fairly certain that's one of the best offensive games (statistically speaking) for the Blues' defense since Chris Pronger was traded and Al MacInnis retired. Hell, it might be the best. Roman Polak scored his first career goal by streaking in on the backside of a rush. He saw Minnesota's attention was focused on the corner and the right wing was wide open. So he cut to the net, got there in time for a centering pass and shoveled the puck past Niklas Backstrom. 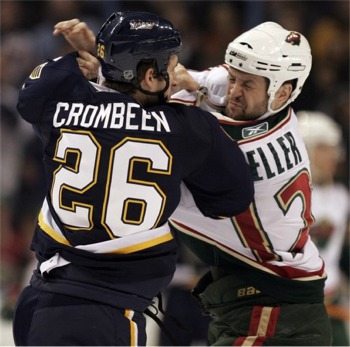 Unofficially, that was Polak's second goal of the game after he accidentally directed the puck past Emmanuel Legace with his skate earlier in the game. The youngster, who has shown surprising speed this season, made up for the mistake and seems to be one of the Blues' young players who is earning the trust of the coaching staff to play more minutes in more important situations.

"This whole night was just a phenomenal defensive effort by our guys. We didn't give them much, kept it to the outside," Legace told reporters in the dressing room after the game. "We just have to keep playing like that. We need to play 60 minutes every game, and I think we played a full 60 minutes tonight."

Legace was right about playing a full game. The Blues actually took a lead early in the first period, a rare feat as of late. Patrik Berglund pounced on a loose puck in the slot and took a well-placed shot that found the back of the net just less than two minutes into the game. It wasn't a terribly pretty scoring chance, but it was obviously effective. Berglund has shown in the last few weeks the sense that putting pucks on net is much more important than trying to pull the pretty play. Hopefully David Perron and his two goals on the season are paying attention.

The Bruins won their 13th game in a row at home Saturday afternoon with a 4-2 win over the Carolina Hurricanes. It balances out that the Blues and Bruins both played Saturday. The Bruins played during the day, but the Blues didn't have to travel. So it all evens out.

In the 4-2 win over the Hurricanes, the Bruins got 32 saves out of goaltender Manny Fernandez. Boston has gotten used to hot goaltending this season. The team has also gotten used to the fragile nature of skilled forward Patrice Bergeron. The center missed much of last season with concussion problems. Saturday he went for a body check and crumpled to the ice for several minutes. His status and the extent of his injury haven't been released.

Fernandez technically is the backup for the Bruins, but he's played in 14 games so far this season, just five less than "starter" Tim Thomas who is enjoying a career season so far. The 34-year-old Thomas is playing in just his fifth season. He's bounced around the minors and international competition so long, people probably forget he was drafted by the Quebec Nordiques. Thomas' 2.15 goals-against average is fourth in the NHL while his 93.2 save percentage is third. Both are well under his career numbers of 2.73 GAA and 91.5 save percentage. He must have had a busy offseason selling his soul to the Devil.

Back in the 2005 NHL draft when the Blues picked Erik "I'm A Good Golfer" Johnson with the No. 1 overall pick, the draft "experts" were torn over the future of forward Phil Kessel. His career got off to a rough start with testicular cancer. Last year playing 80 games he scored 19 goals and 18 assists. This year, he's already topped that with 21 goals scored in 32 games. And at age 21, he's still getting better. His struggle with cancer undoubtedly slowed his hockey advancement, but it forced him to do some growing up. His skill was never in doubt. His drive, determination and personality were. Now, people only want to talk about how many goals he could score this season.

Marc Savard has seven points in his last five games after a four-point night against Atlanta not to long ago. His 21 assists has pushed him to 39 points in 32 games. Look out for Milan Lucic, the next Cam Neely. He likes to play a physical game and can score a few goals. Defenseman Dennis Wideman has seven goals on the season, tied for fifth most among NHL defensemen. I still like the trade that netted the Blues Brad Boyes.