This is the first time we've tried this with the new site setup. So bear with us.

The St. Louis Blues are in Detroit tonight. And as we all know, the fans in Detroit are classy, well behaved and above all else, classy. 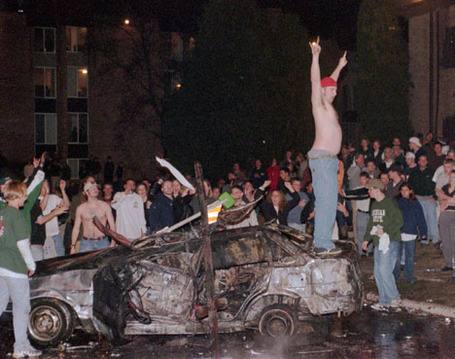 Contrary to a local Internet "journalist," youngster David Perron is in the lineup tonight. Well as much as being on the fourth line with Dan Hinote and Cam Paddock counts. That's from the Morning Skate blog with Jeremy Rutherford. He also reports:

Game time tonight is 6:30 p.m. CST. We'll be back around then to drop a few fuck Detroits.

20:00 And we're about ready to drop the puck. Happy Festivus. Or Christmas Eve Eve if you will.

The Conk Block in net for the Wings, third game in a row. I guess they're saving Osgood for the playoffs already.

19:30 I have a theory that Brad Boyes, especially for a 40-goal scorer, misses open nets more than most players. He just hit the post.

18:00 End to end action. I bet that's exactly what Murray was preaching in the dressing room. "Hey fellas. Go out there and play as wide open a game as possible against these guys."

17:47 Conk Block took one off the dome. He's a goalie. His head isn't important.

16:40 The defenders on these quick rushes by Detroit look like cornerbacks giving speedy wide receivers 10-yard cushions. They're skating as fast as they can backwards to keep them in front.

Kind of empty there isn’t it?

Its a funny story actually.

Dude, it's just like the St. Louis Cardinals. The crowd is a sea of red. Red seats.

Penalty on the Blues. Sweet. Good job Woywitka. At least he didn't just let his man skate alone in front of the net this time. So he at least listened to Murray Sunday night.

14:57 Oh my. Datsyuk put one up where momma hides the cookies.

"I don't think Manny saw this one at all," Federko said. No, but I think he heard it go by his ear.

Fucking move Holmstrom out of there, Jackman. Get a forklift if you have to.

I admit, what Holmstrom does in practice made me laugh. You know some of the other blogs around the SB Nation network are not so forgiving with the cursing and shit. In fact the little message you see when you sign up to comment, even on other hockey blogs, kind of tries to persuade you against saying things like fuck Detroit. Weird.

12:00 Not that there's anything wrong with this, but I don't think Colaiacovo has never seen a shot attempt he didn't like.

11:00 "I bet Zetterberg would be a nice mentor for Berglund," Kelly said. No, that didn't sound gay at all.

Berglund goes for accidentally knocking a guy down. And there's no game clock again. Detroit really needs that auto bailout.

Fuck the entire state of Michigan. Wings still on the power play.

Franzen goes to the box for getting beaten with the ugly stick about the face as a young child.

Trying to comment, find images, yell at the dog, talk to the mother in law and not get yelled at by the wife slows down the posting. Still 2-0 Detroit. Getting late in the first period. Pull up a chair, crack a cold frosty one and spread some warm holiday cheer all over the comments.

Wait, that came out wrong.

2:34 Power play for the Blues. Let's see where this goes.

1:53 Holy crap. Another Detroit penalty coming. Blues slow to give the puck up for the whistle. Puck comes in front, much scrambling. No goal. Heart palpatations aplenty.

0:36 Scrum in front of the net. Much raping of a prone Tkachuk. 5-3 power play is going to expire. Damn.