Red Wings Show It's No Contest

Share All sharing options for: Red Wings Show It's No Contest 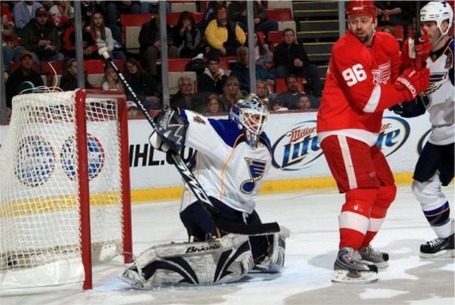 Those asshole fans that invade Scottrade Center a couple times a year wearing their damn red jerseys and contempt for the local team were right. And it sucks.

For years, well before Tuesday night's 4-1 loss at Joe Louis Arena, Detroit fans have said there is no real rivalry between their team and the Blues. Sure Blues fans could hate the Wings, but Detroit fans could care less about the Blues or their supporters. Just ask Cubs fans how frustrating it is to be on the wrong side of a rivalry, always hoping for validation and never finding it. 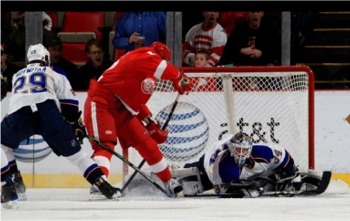 Detroit fans dismissed St. Louis after the Wings won their first cup in several generations in 1997. They said it when the Blues won the President's Trophy in 2000. They said it before the lockout when St. Louis was still making the playoffs every season. And Blues fans denied it. We called them stuck-up bastards who flaunted their team's free-spending ways and collection of Hall of Famers. They called us bitter. It seems that they're right. And it sucks.

As the Blues continue shuffling their skates, giving a decent effort but not moving anywhere, the Wings remain at the top of the NHL. The Wings are the bullies of the NHL and Blues are the 90-pound weaklings just waiting to get their milk money stolen during recess. And it sucks.

In Detroit Tuesday night the Wings allowed the Blues to think they could compete in this game for about the first five minutes. And then the Wings took control and never looked back. Two goals and then a key 5-3 penalty kill late in the first period by the Wings and the game was well in hand by the first intermission. Just seeing the difference in skill and the fear with which some of the Blues players showed on the ice, it seemed pretty clear what the outcome of this game would be. Detroit would score four times before rookie Patrik Berglund tried getting the Blues back in the game with his 12th of the season, but it wasn't nearly enough. 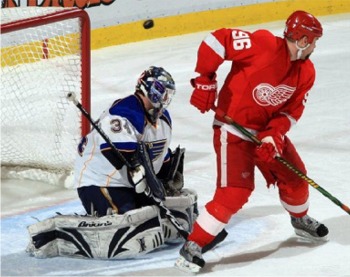 How I long for January 1993. That's when the great brawl involving Bob Probert of the Wings got out of control and led to the memorable "Here comes Cheveldae!" call by Blues broadcaster Ken Wilson. Goalie Curtis Joseph beating Tim Cheveldae with his fists at center ice was symbolic of the Blues handing it to Detroit. Those were the days. I'd even take Cory Stillman and Doug Weight double-teaming a Wings player along the boards during a post-whistle scrum prompting assistant coach Dave Koci to throw a folding chair on the ice. Instead of putting up a fight, the Blues practically laid down for the Wings Tuesday night.

What I'm curious about is what happens when a head coach calls out most of his players in the press by name after a bad loss and then the team plays just as bad or worse the next. Oops.

The Blues are doing a lot of things to lose right now. They're taking way too many penalties for instance. On the season they have received 579 penalty minutes. Only Philadelphia, Anaheim and Vancouver have been sent more men to the box to feel shame. And when the penalty kill is still working to find its identity and not playing up to expectations, it's a deadly combination.

The Blues are in a brutal stretch with their schedule. They're off now until Saturday when San Jose comes to town. That means in three straight games, the Blues will play the three best teams in the entire league. Hello three-game losing streak.

Sorry for the bitterness on Christmas Eve.