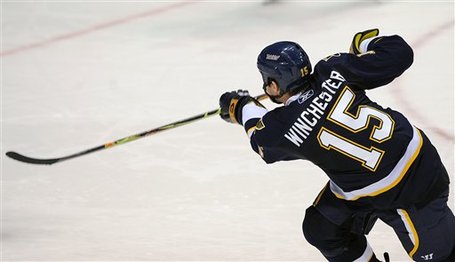 Usually when a hockey team takes a bad beat you'll hear the players and coaches talking about how important it is to quickly get back on the ice; to get into another game; to put it behind them.

The same thing can probably be said for a battered and beaten Blues team that came up with a big win last night. The longer they're allowed to soak in the win, which could have been an even bigger win if not for the solid goaltending of Evgeni Nabokov, the more they might start to believe that they aren't that undermanned, after all.

Starting a game less than 24 hours after you started your last game is a bit of a bitch, but it could be worse: you could have just flown into town after losing a game just last night in Dallas, as the Ducks did.

As per the usual, most of the regulars are down at the DrinkScotch this Sunday eve, so the GDT is here for you to rant/rave/welcome fans from the other team/catch them backstabbing you on their own site minutes later.

For those of you who enjoy a pre-game report, the NHL was kind enough to provide one.

For those of you who want to see what the Duck fans have to say, the Battle of California has you covered.

For those of you who just like to bunker down with fellow Blues fans and not bother with any of that other stuff, well, you're already home.