As, unfortunately, has become tradition around the holidays in St. Louis, fans of the Blues are faced with a hard reality: every time your team wins it takes them farther away from a top draft choice and another great young player to build your team around.

It could be worse, you could be these guys. 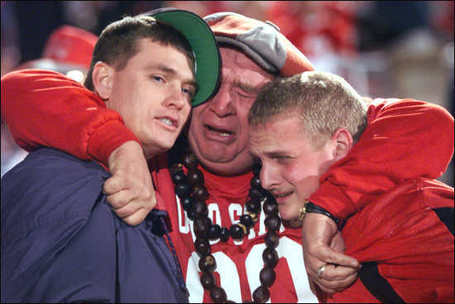 Beginning back in 2005 as they came out of the lockout year, the Blues' previous owners, Bill & Money Laurie, decided to put the team and the building on 14th & Brett Hull Way up for sale. Spurned in their attempt to bring in an NBA team for freeloader Bill to have as his special new toy, the Lauries cut their losses, burned every bridge with the fans possible and got rid of the hockey team.

In so doing, they traded away franchise defenseman Chris Pronger for dimes on the dollar, didn't attempt to re-sign Pavol Demitra and gave veterans Doug Weight and Keith Tkachuk a cast of waiver-wire pickups and AHLers as their supporting cast.

That was one bleak season.

And the few fans who did stick around to follow that team started tracking the top players available in that summer's entry draft. We became familiar with players like Phil Kessel, Jordan Staal and, of course, Erik Johnson.

And quite a few of those fans started fan-tanking. For those of you who are unfamiliar with the term, Brad Lee covered it pretty well in our print edition for the Sharks game last Saturday. In his article, Brad said,

Bill Simmons over at ESPN the website a few years ago talked about how teams out of contention have been known down the stretch to often quit trying in the hopes of improving their draft status. If they can do it, then why can't fans root for their team to tank? So that's what he did with his Celtics. He rooted for them to lose every game down the stretch in 2007 so that they could be in a position to draft Kevin Durant or Greg Oden. They didn't luck out and got the fifth pick in the draft. So instead of drafting one of those two players, they made some trades and acquired Kevin Garnett and won the NBA title. So his tactic of fan tanking didn't even work and it took an imaginative and daring front office to pull things together for the team to win.

"Less rational fans can't stomach the thought of fan tanking, even when it's with the most noble intentions, because it makes them feel like traitors," Simmons wrote.

I don't think I'm less rational than most fans even though I write for an underground, fan-run paper about a below average hockey team and devote several hours to writing for the paper's website. It's not like I've got a playoff ticket jar on top of my refrigerator where I put spare change in with the hope of putting the money towards hockey tickets in April and May. If I did that, I would probably have enough money to buy a car since the Blues' last trip to the playoffs.

And yes, rooting against the Blues not only in one game but in dozens of games is being traitorous. While you root for them to lose now until April, are you doing that while wearing your Tkachuk jersey? You still going to games and doing that? How do those $10 beers taste while you root for the Red Wings? Are you even bothering to watch on TV?

I think it's noble to be a dedicated fan. Anyone who went to multiple games in 2005-06 (and judging by the attendance, there weren't many) deserves the equivalent of the Purple Heart for diehard hockey fandom. Putting up with this rebuild is going to take patience. Understanding. Gallons of hard alcohol. Something tells me that the Blues are going to have good draft picks this coming summer regardless of who I'm rooting for. And it doesn't mean I'm expecting the Blues to win every night, but there's something called hope. And hope is a good thing. Besides, I'd much rather enjoy a Blues win than reveling in a Blues loss.

Here's the point. If you don't want the Blues to win every game, why bother? There are no guarantees with prospects developing. Very few players even at the top of the draft at age 18 can be guaranteed to become superstars. Sure, either center John Tavares or defenseman Victor Hedman would be great additions to the Blues organization. At this point they seem to be the consensus top two players available in next summer's draft. You pick third and you've got the best of the rest. Still, there are no guarantees.

Granted, it's just a game. So winning and losing shouldn't matter that much. Knowing that by losing the Blues might draft a franchise cornerstone that could provide years of joy watching him play wearing the Note, it should be easier. But I just can't do it. I invest too much of myself into watching and following this hockey team. And if you've read all this so far, you might feel the same way I do.

The next night, in our Ducks issue, Duke (author of The Fantasy Files) continued on the topic:

"Fan-tanking" has been a hot topic lately, with the next Gretzky and Pronger apparently at the top two spots in the 2009 entry draft, but I'm with Brad Lee on this one: I can't do it.

Rooting against the Blues means rooting against David Perron, and there's not a chance in hell that I could do it. Have you ever looked into his eyes? Watching him handle the puck is like hearing the Beatles for the first time all over again.

Back in that 2005 season, when you really couldn't blame fans for rooting against the mess of a team that was being put on the ice night after night, not even I could do it. Even with visions of Johnson, Kessel or Staal suiting up for the team the next year. I actually wrote an article that year entitled, "Screw it, let's go for 26th place."

And I have to go with Brad and Duke on this year, too. Having John Tavares and his offensive skills in the lineup would be a nice consolation prize for a really shitacular season, but nothing beats a win.

This team is well on the road to a nice re-build. If not for the freakish amount of freakish accidents and injuries they've sustained this year, they'd be in the fight for a playoff spot.

That isn't going to happen this season, but you still won't catch us rooting for losses. It just doesn't work that way.