And they say nothing good comes from New Jersey. 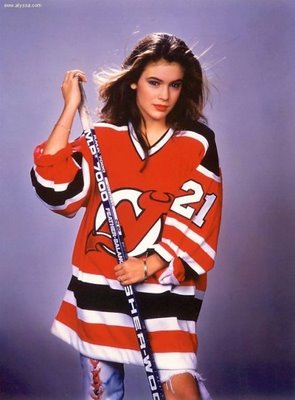 There, that's better. Who's the boss, Alyssa?

Oh that's right, it's TJ Oshie. The Blue Ball of Hate is expected to return to the St. Louis lineup tonight. He made one comeback attempt from his high ankle sprain he suffered Nov. 1. It didn't take. So here's to hoping he plays every game left on the schedule.

Emmanuel Legace is in net. Martin Brodeur is still on IR. Cam Janssen is hoping to make an impact on his old team while Bryce Salvador comes home. The Devils come to St. Louis a couple times a decade. Mark the occassion in the Game Time game day thread. Fill up the comments and do us proud.

If you want to see how the other half thinks, go to In Lou We Trust. To me, that's like starting a Web site called ILoveSaddamHussein.com, but to each his own.

We'll be back later. Don't wait up for us.