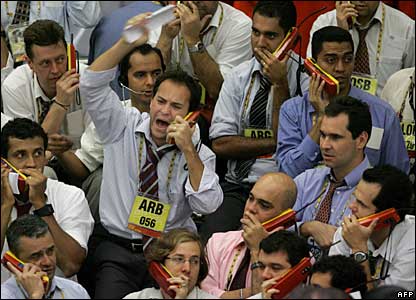 General managers in the NHL, like all sports, are basically liars. It's in their best interests to not tell the media what they're really thinking 100% of the time.

If a GM were to come out and say, for instance, "Barret Jackman is as good as gone. The guy wants too much money, especially considering the fact that he's basically a good No. 3 defenseman. We'll definitely be shipping him out by Tuesday," well, that particular GM would have just handcuffed himself and given all of the advantage to any other GM in the league who would want Jackman and his minus-267 this season.

"Look, current general manager, we all know that Jackman is like a No. 3 defenseman and that he wants too much money. I'll give you a second round pick and an option to switch furry mascots in 2009 for him."

See what I'm getting at?

But the comments made by John Davidson to Jeremy Rutherford of the P-D that were published today seem to indicate that the Blues will be making some moves at the deadline. While the suggestion is that Jackman may take a "market value" contract, which would seem to be about $3.5 million based on contracts handed out to Nick Schultz and Brent Seabrook in recent days, the Blues already have $4 million invested in Fragile Jay McKee, $4 million in Mr. Roboto Eric Brewer, $2.2 million in Sister Christian Backman and an incentive-laden contract given to Erik Johnson that could be worth as much as $3 million if it's anything like most first-overall draft picks' contracts.

Can you really give about a combined $7 million to Jackman and Bryce Salvador when you have younger, cheaper defenseman logjammed in Peoria? The simple answer is that you don't pay out over $20 million in contracts to six defensemen.

The article also indicates that there have been some talks between the Blues and the Rangers about Dr Hook Martin Rucinsky, who only seems to play well when he's riding shotgun on the Rangers' line with Jaromir Jagr. Honestly, a trade like that is probably best for the player and for the Rangers. Depending on who or what would come back, that deal could work out best for everyone. Especially me, since that guy drives me right up a wall.

When it comes right down to it, I'd bet that not only Jackman and Rucinsky will be gone come game time on Tuesday night, but that Salvador and probably one other guy none of us see coming will be gone too.