Share All sharing options for: The Unwatchable Series Continues Unwatched 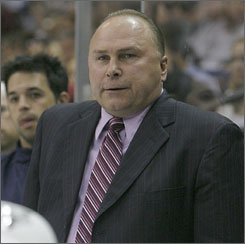 Short of an 11 second rally by the Preds that saw them put two goals past Dinosaur Hasek, the Wings took it to Nashville once again. I also heard something about yet another controversial call going in favor of Detroit, though I've yet to see it.

"We had two high-end officials that are doing everything they can, just like us, to get to the Stanley Cup finals. If you think for one second tose guys aren't doing the best they can, you're mistaken."

The referees on Saturday were Kerry Fraser and Dan Marouelli, both of whom have their detractors. Plus, as we mentioned before, if it's a questionable call to make, why wouldn't you call one rather than give one team an advantage?

As for Monday's game 3? Well, as our own esteemed Manny Legace said during the Versus broadcast on Sunday night, he expects the Predators to come out, play hard and make it a series again. He also said that it's intimidating to go play in Detroit and being home should be a big lift for the Preds.

Forgive me if I go against Manny on this one, but returning home to a goal celebration song of, "I like it, I love it" by some shitty country band is somewhat south of what I'd call motivational. While the Predators will clearly get an emotional lift from the home-cooked grits and the wild cheering of dip-spitting, Summer Teeth having fans (who couldn't get tickets to the Country Music and Moonshine Show over at the Convention Center), it'd take a gift from the hockeygods for the officiating lapses and fortunate bounces to all go their way and allow them to win two at home and get back into this series.

We can hope, though.

In the meantime, we'll pretend we're gonna watch this game, though to be honest we'd have to take the same tack as this loyal Game Time guy who tried his best to watch game 2 on Saturday while donning his brand spankin' new GT shirt, his lucky Blues headgear and clutching his picture of the Cup and his trusty bottle of Kentucky bourbon.

Here's two things we know: we hate the Wings, but we love Game Time people.