We're going to attempt the live blog tonight. So big reminder: REFRESH THE STORY TO SEE THE LIVE BLOG COMMENTARY.

Tonight the Blues take their two-game winning streak to Edmonton. 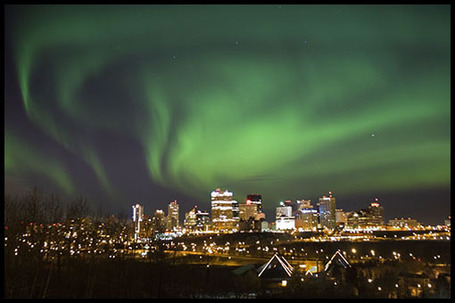 Jeremy Rutherford at the Post-Dispatch sais Alex FrankenSteen is out and Dan "I have a hot wife" Hinote is in. Legace in goal as far as we know.

I feel for anyone who doesn't have cable and Channel 11 is a person's way to catch the Blues. I get that. But no HD broadcasts and little technical glitches (like having the white balance off making the game unwatchable) adds up to me welcoming FS Midwest taking over every game next year.

Oshie is a point a game player since returning from injury. It seems like he's been back more than four games, but the long break and the holidays have meant not much hockey lately.

And I think it's funny the Oilers skate out from the bench through a big oil derrick. Western Canada, how quaint.

Welcome to a bunch of the regulars. If you're stopping by tonight, give us a shout. We like new commenters. And I promise most of the folks around here don't bite.

And on this chilly Sunday night, I'm curious where people are checking in from. In the comments, tell us your general geographic location. Personally, I'm in MO'Fallon (O'Fallon, Missouri compared to O'Fallon, Illinois).

19:00 Blues standing around a little in their own end. Oilers buzzing early.

18:07 Tyler Strachan pinches in and gets a shot on net. I have a hard time remembering he's still on the team.

17:30 Colaiacovo loves to shoot the puck. The difference between his shot and Brewer's is unbelievable.

15:39 Shot from the point and it was intentionally shot high to get a deflection for Walt in front.

And over/under on the number of times Federko screws up Colaiacovo and Cogliano's names?

Oilers' assistant coach has a microphone in his sleeve to talk to the coaches upstairs. He looks like he's in the Secret Service, but I bet he wouldn't take a bullet for Mactavish.

When you hook a guy, don't let go of your stick so it's lodged under his arm pit. Because it kind of looks unnatural and even Mr. McGoo will see that one.

12:20 The Rifleman, Brad Winchester, looks more like a basketball player than a hockey player.

11:40 The Oilers in taking Gilbert Brule basically said, "We're not satisfied with our own struggling young players, will take yours too."

We've had one reference to the great ice in Edmonton. Every game up there they talk about it. Even if the ice was crappy, I think everyone would say how good it is. Do they import it or something?

8:01 Legace makes one of his best saves of the year, charging out of the crease towards the right circle.

I can't remember a better save from him this year.

By the way, if anyone knows Fred, keep that in mind for a forthcoming Project Mayhem assignment.

5:38 Oshie hit Winchester...went down like a sack of flour. Why can't the Rifleman do that to any of the Oilers?

4:20 As a demographic (Blues fan), I wonder what advertisers think of us.

Most common commercials during Blues games:

3:30 Another Oilers penalty. The Backes line is keeping the puck in really well tonight. Very tenacious play so far.

I was hoping Pagan would be around so I could give him a hard time about his fantasy team losing to me this week head-to-head.

0:50 Not the most eventful first period. Blues 0-3 on the power play means they'll be due to score later in the game with the man advantage, right?

Love Foo Fighters during the stoppage.

After 20 minutes, it's still scoreless. Kelly calls it a good first period, apparently because the Blues aren't losing.

Federko with the second ice comment of the night.

They decided to show a clip to Roman Polak. He watches the clip silently. No one speaks. Then he says. "Yeah."

"Yeah, yeah. I remember that."

I'll let you know when the next period thread is up.