Scored tied 1-1 after 40 minutes of action on the most lovely ice I've ever seen. I wish I could hump it. 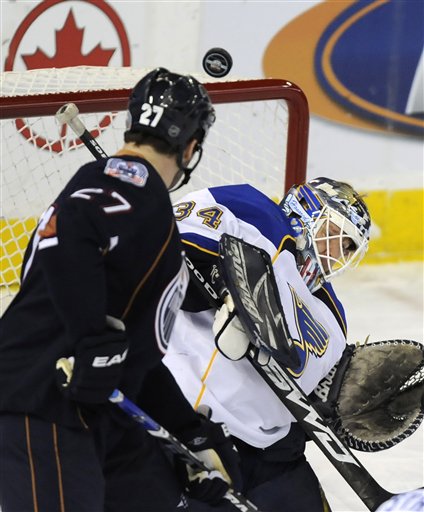 More when they drop the puck.

17:00 OOPS. Sorry, I screwed up and had three or four posts up. Operator error.

And I think I deleted a few comments. Sorry. That was dumb.

15:00 A line of Tkachuk, Crombeen and Hinote is just screwed up as someone mentioned in the first period. Lineup is like one big ugly Mr. Potatohead right now.

"Manny didn't see that one at all." He never does on the ones that score, Bernie.

12:12 Blues shorthanded. Federko says players don't know what will be a hook and what won't. When money changes hands, it's hooking.

9:58 Blues doing well enough to hang around, hang around and be dangerous. So either they're teasing us with a letdown soon to follow...or Mactavish is going to go home and kick his dog.

The Blues are bussing to Calgary? Wow, Western Canada is different.

7:30 Watching games from Canada is so weird. The crowd is so quiet most of the time, just politely sitting there, watching. No one moving, getting up. It's weird.

6:00 NO THIRD PERIOD SHOTS FOR THE BLUES. No power play goals (called it). They're offensively challenged tonight.

Must be the ice.

5:20 Blues throwing the puck at the net. Unfortunately, none or making it actually on net.

2:55 FIRST SHOT ON GOAL FOR BLUES. Federko said they only need one...if they scored.

1:11 FIRST SCORING CHANCE OF THE PERIOD. Backes going to the net. Nice play. No goal. Figure the net should be empty soon.

Well this hasn't been the most interesting or fun or good games of the season. But we still have the ice.

0:58 If the ice is so good, how did the puck hop over Iceberg's stick at the point?

AND THAT'S THE END OF THE WINNING STREAK.

And Federko just called it a two-game winnless streak. Perfect ending. Too bad Coglicanovo wasn't the player of the game.

And there you have it. Thanks for tuning in. We're still figuring out the site and if these live blogs are a good idea. To keep up with the live comments, you don't see the live blog as much. And if it's not a value-added type thing, then why do it, right?

If you have any thoughts on the topic, drop me a line at gtbradlee@gmail.com.