The Blues Hall of Fame

Share All sharing options for: The Blues Hall of Fame

[This story originally appeared in the Jan. 15 issue of St. Louis Game Time.]

In a little over two weeks, during Super Bowl Week, the NFL will announce the Pro Football Hall of Fame Class of 2009.

Monday afternoon, it was announced that Rickey Henderson and Jim Rice were elected to the Baseball Hall of Fame.

Every October, the Hockey Hall of Fame welcomes their annual class of four. This year's was Glenn Anderson, Ed Chynoweth, Igor Larionov, and Ray Scapinello.

How about a St. Louis Blues Hall of Fame? 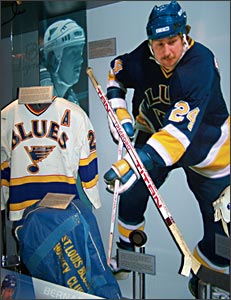 Bernie Federko is in the Hockey Hall of Fame, but does he make our list for the first inductees into the St. Louis Blues Hall of Fame?

Before you look up to the rafters and say "Well, it is fairly obvious that Dan Kelly, Bob Plager, Doug Wickenheiser, and the six players who have had their numbers retired would be in the Blues Hall of Fame," think about it for a minute.

While the retirement of a number is an honor to be proud of, quasi-immortality and a way of being remembered for years, it isn't the ultimate honor for a player. Being a Hall of Famer is.

Honored and Inducted aren't the same.

"The broadcast is next, with John Kelly and number retiree Bernie Federko," doesn't quite have the same zip to it, does it?

I'll bet of the farmland around Viking, Alberta that Brian Sutter would have had Brendan Shanahan wear his retired No. 11 (the number Shanny wore in New Jersey before he came to St. Louis) when he came here if it meant that he would be elected to the Hall.

So let's figure out a First Class for the Blues Hall of Fame.  In using the term "First Class" I also want to indicate a double meaning.

Players, and coaches; executives, owners and broadcasters, all are eligible for induction. The only qualification for induction is that the following statement must be true: "If not for (blank), the St. Louis Blues wouldn't have been what they were when that person was here, and they wouldn't be what they are today."

Like flying in the comfortable seats in the front of the plane, like being sent through the postal system faster than everything else, and like service at a five-star restaurant, this First Class should be special.

To wit: The National Baseball Hall of Fame and Museum (yes, that's the official name) welcomed its First Class in 1936. And, yes, I know this is a hockey newspaper, but remember, just a few blocks due east of here St. Louis is building a Ballpark Village, not a Hockey Rink Township where the Kiel Opera House is. The five players inducted in 1936 need no descriptions or team affiliations or credentials mentioned. Those who know sports, not just baseball, know them by name and know, without question, that they belong. Ty Cobb, Walter Johnson, Christy Mathewson, Babe Ruth, and Honus Wagner. No further explanation needed, no verb in that sentence required.

Also remember, Halls of Fame aren't supposed to open their doors for just anybody.

The Hockey Hall's annual foursome keeps a tremendous deal of exclusivity to it. Tom Barrasso, Guy Carbonneau, Dino Ciccarelli, Ken Daneyko, Doug Gilmour, Ron Hextall, Brett Hull, Brian Leetch, Mike Liut, Kevin Lowe, Adam Oates, Luc Robitaille, Pat Verbeek, Mike Vernon, and Steve Yzerman are all HoF eligible in 2009. And those are just 15 of the 67 names on the list. Go ahead, pick just four of them. OK, let's make it easier; assume that Hull and Stevie Y are locks. Now pick two more. Not so easy, is it?

With apologies to the Gassoff family, being dead doesn't mean you're in necessarily. Bob Gassoff's death was a tragedy, and Gassoff should never be forgotten, but he's not a Blues HoFer. 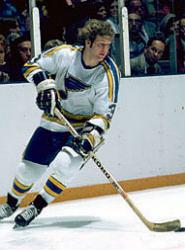 With all due love and respect, Gassoff doesn't make the cut.

A pit stop in St. Louis during a Hall of Fame worthy career doesn't automatically make a player a Blues Hall of Famer. To Scotty Bowman, Al Arbour, Scott Stevens, Brendan Shanahan, Rod Brind'Amour, Grant Fuhr, Glenn Anderson, and Wayne Gretzky, with sincerest apologies, you're not locks to be Blues' Hall of Famers. The Blues may have launched your careers, or the Blues may have been a stopping point along your trail, but when all is said and done, others are more worthy.

I'm not so sold on the number being set at four. It is too easy to make it sound like the Mount Rushmore crap that so many people want to name.

Anyway. Let's settle on the number of six. Six players on the ice at even strength, the Blues were one of six expansion teams, Red Berenson scored six goals in a game, the Blues have advanced to the Conference Finals six times in team history, and the franchise's best player for the next decade, Erik Johnson, wears No. 6.

In alphabetical order, my votes for the First Class of the St. Louis Blues Hall of Fame are:

Yes, Harry Ornest. Absolutely, and without question. If not for Harry Ornest, the St. Louis Blues wouldn't be what they are today.

I considered Gordon Berenson, Mike Liut, Joel Quenneville and Gary Unger, but they didn't have the impact on the franchise that the first six did.

We know that you have an opinion about this. Go to our website (if you haven't figured out the address yet, you've have real problems) and give us your six.