2008 Was Forgettable Year For Blues

Share All sharing options for: 2008 Was Forgettable Year For Blues

Thank God the calendar year 2008 is over for the Blues. If you counted just games played during the year, the Blues had a horrible 12 months. 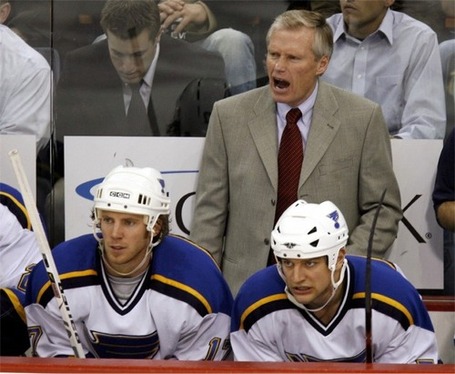 So far this season the Blues are 14-20-3. That's the worst record in the Western Conference. From Jan.1, 2008 until the season ended, the Blues had an eerily similar record of 14-22-9. You add those together and over the 84 games (two more than a regular season schedule), the Blues have a combined record of 28-44-12. That totals 78 points. Say the Blues have two less overtime losses (to equal the right number of games played), that would equal 76 points, only five more points than Tampa Bay earned last year - the lowest point total of last season.

Now I didn't need to count up all the wins and losses to convince you, dear reader, that the Blues have played like shit this season. The standings are enough proof of that. What that record over 12 months shows is that the collapse of this season - blamed mostly on injuries - isn't a new thing. Of course the lengthy injured list hasn't helped things.

Even though there weren't major changes in the offseason, this started out being a different Blues squad this season. Patrik Berglund and TJ Oshie provided a spark on offense that hadn't been seen in recent seasons. David Perron while an inconsistent and infrequent goal scorer, is still learning on the job and getting better. Chris Mason is the backup goaltender that could have kept the Blues in the playoff hunt a season ago. Andy McDonald and Paul Kariya were playing for their next contracts, and playing well. And then it all went to shit.

What this season and the end of last year illustrate is a general lack of franchise depth. They had Emmanuel Legace playing at an All-Star level last year, but when he got dinged up or when he was not available in back-to-back games, the Blues almost always lost. This season, they had no replacement for McDonald, Kariya, Oshie and others. Of course, it's damn hard to say any team could replace five to seven guys in their lineup at any one time.

So let's do something hacky that the mainstream medi loves, predictions for 2009! Give us a couple of predictions for the calendar year. That covers the rest of this season, the draft, free agency, summer and the beginning of next season. What do you have in your crystal ball? Let us know in the comments before we throw out the GDT for tonight's game against Carolina.