Can We Postpone The All-Star Break?

Share All sharing options for: Can We Postpone The All-Star Break?

Don't look now, but the Blues are one point from climbing out of the Western Conference cellar. They have a record of 5-1-2 in their last eight games, arguably their best stretch of the season so far. I'm sure Chris Mason would like to keep playing instead of taking a rest for eight days. 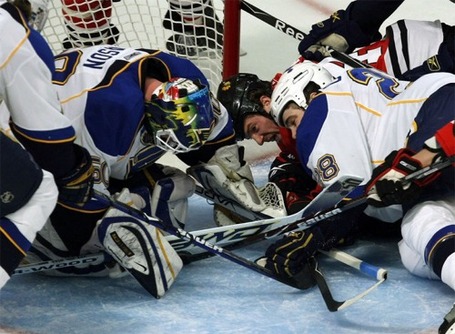 The miracle comeback Monday in Boston was followed by an ass kicking in Chicago, 2-0 on Wednesday night. The Blues played the Hawks well Saturday night and deserved a better fate than a 2-1 overtime loss. That may have sparked the Blues in pouring shots on Cristobol Huet and keeping the puck in the Chicago zone. Of course nine minutes of power play time just in the first period will help that.

The Hawks took some dumbass penalties, especially on icing calls deep in their own ends which could have seriously hurt David Backes and Dan Hinote. They put a puck over the glass for delay of game. Goals by Jeff Woywitka and Keith Tkachuk stood up as the Hawks tried to come back in the third but couldn't pull it off.

I've said a couple times recently that this season is over, the games pointless. I still believe that, but it makes me giddy to see outcomes like Wednesday night's game. It was a game where the Blues forced their will upon the Hawks and subdued them over the course of the game. It was dominating, convincing. I'm gushing.

Below are the postgame interviews hosted by Fox Sports Midwest's Jim "The Cat" Hayes. Obviously, the mood is a little lighter outside the dressing room after a nice win.

Andy Murray: You know we've had a team that works hard all the time, plays physical. There's been times this year we didn't come out on the right side of the score, but tonight again we were deserving of the win. We were physical, I thought we played smart. I thought we took their space away. We wanted to come in here, this is a building with a great deal of energy and we wanted to suck it out.

JH: You had told me before the game you had worked on the power play. You wanted to get Woywitka involved in the offense. You did tonight and that play worked beautifully.

AM: That was the one you wrote up for me before here. It's the first play you've ever drawn up that actually worked. You're not just a baseball guy.

JH: You get a little scoring from everyone, that's just what you need.

AM: I feel good for Jeff Woywitka. We felt he needed to raise his level so he sat out a couple games and has come back and has played well. We had a lot of different people contribute tonight. In the third period there, Chris Mason was solid. He wasn't tested that much early in the game, but he made some nice saves at the end of the game.

JH: A couple of plays, interference penalties that looked real dangerous. Were you surprised Barker wasn't tossed in the first?

AM: I haven't really had a chance to look at it. I know we got the five minute power play, didn't take advantage of it. Fortunately we came out and in that next power play and got one and got that first goal. That's so important. It's such a great rivalry between these teams. When you get the lead it makes such a big difference.

JH: You guys have back to back great performances. Is it a bad thing to have the All-Star break now, or a good thing where you have some momentum and some time to think it over?

AM: What do you think I'm gonna say? I mean, it has to be the good thing otherwise we're looking at the negative side and I'm a glass half full kind of a person. To me it's great to have the break right now, get some chance to work on some things in practice and have a full building when Ottawa comes to town next Thursday.

JH: And don't worry, when Thursday comes around, I'll have another play.

Jim Hayes: There were times where the action was in the other end and you were a lonely guy. I guess that's a good thing. Is it tough to stay in the game during those stretches?

Chris Mason: It's tough, yeah. In the first two periods we had a lot of shots and a lot of pressure on them. They kind of came down sparingly the first two periods. It's kind of tough to keep your body warm and your concentration. I knew going into the third they'd come out with a hard effort. The guys were ready there. They had a lot of time in the zone, but we were able to keep the puck out.

JH: Given the choice though, it's better to have the puck in the other end instead of facing a barrage of shots, right?

CM: Well, yeah. On the other spectrum you'd like to get some work just to stay in the game to avoid long periods of shots. That's why it's difficult. You don't want to be giving up scoring chances at the same time.

JH: An outstanding effort tonight. I'm not the guy that's going to point this out, but your play has really picked up since you had the spa treatment. Have you noticed that? Have you connected the dots?

CM: There might be something to that, although I'll probably not do that again as long as I live. It was a good experience.

JH: It was pretty painful. How about heading into the break with back-to-back wins that have been pretty impressive?

CM: We're playing really good hockey and we're starting to get some results for our hard work. Earlier we'd be losing the one-goal games and now we're finding ways to hold on and win. We had a great comeback the other night. I'm just proud of the way the guys are playing and that's how we have to play to win.

JH: Congratulations on the win and thanks for the time.