Share All sharing options for: Blues Return From Break

The Blues take the ice tonight with some rust in the legs against the Ottawa Senators. And shockingly, the break came at about the worst time possible for the Blues. They were actually winning before the break. Go figure. 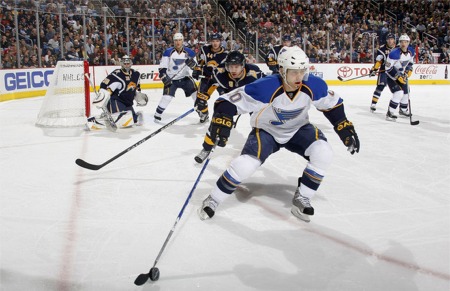 The Blues have two wins in a row. Wait, it gets better. They've gotten points in four straight games. Even more impressive, they've won five of their last eight games. The last two games were statement wins. A 2-0 shutout at Chicago and a last-second miracle shootout win at Boston said St. Louis has refused to give up on this season even if most of the fans in the stands have. The Blues have a daunting task heading into the unofficial second half of the season.

Influential hockey blogger James Mirtle, a staffer with the Toronto Globe and Mail, believes that 90 points this season will get a team into the playoffs. With so many teams bunched up around the final playoff spots, there will be a lot of even teams beating even teams, ensuring that there won't be much if any separation in the standings. If the Blues are to hit that 90-point plateau, they will have to go 24-11-1 down the stretch. To compare, the San Jose Sharks need to limp home with an 8-28-0 record to hit the 90 points. Hello penthouse to the poor house. Regardless, the Blues are still just nine points out of the final playoff spot with nine total Western Conference teams bunched together within those nine points.

I'm not going to say that it's impossible for the Blues to hit 90 points and win more than twice as many games as they lose when they sit four games below .500 (if you don't count overtime and shootout losses as losses). But it's pretty freaking impossible. The Blues are going to have to win about three out of every four games from here on out. They've only done that three times this season. That starts tonight against Ottawa, a team that needs to go 26-11-0 to hit 90 points. The Blues have to win tonight. No excuses. You want to read more positive words Saturday night? You want to keep hope alive? The Blues better win tonight.

Nobody asked me, but here are some keys for the Blues to stay on the winning track as we move into February.

First, they need center Andy McDonald back. They need a healthy, dangerous, talented McDonald and not a slow, balky, tentative McDonald. He was the key to the early dominance of the power play. He made the entire team better. In his contract year, McDonald was all about showing he deserves a raise in the offseason. And with his broken ankle, he knows he's probably going to leave some dollars on the table. If he's healthy and confident, McDonald could come out fired up and ready to prove the beginning of the season is his normal playing level and not an aberration.

David Perron needs to score more goals. His five scores in 45 games is shocking compared to the 13 he netted in 62 games last season. Plus, at age 20 he's a year older, been around the block a few times. Granted, he's got 25 assists - easily the most on the team. But it's not like he's not trying. He's been credited with 103 shots on net. That's 35 more than his rookie season. And it's not like he's not aggressive with the puck, he is. But the truth of the matter is he's only scored on 4.9 percent of his shots. He had a stretch of 19 straight games without a goal. He did have eight assists during that time span, but that's simply not enough offense from a guy in Perron's role: a second line player seeing major time on the power play at the point and in crunch time situations. If the Blues want to challenge for the playoffs, they need more offense from Perron.

The goaltending has to get better. The rest of this season is a tryout for Emmanuel Legace for either the Blues to re-sign him or for another team and Chris Mason to be the starter next year if Legace goes elsewhere. Every single game for each is important, and they have to demonstrate that. Legace has not played up to the expectations he helped set a year ago. In 12 months he went from All-Star goaltender to having a 3.12 goals-against average that is ranked 39th in the league and a save percentage of 88.8 percent which is 40th in the league. What a let down. Now I've been as big a Manny supporter as there has been, but unless he picks it up and turns his season around, there's no team that will trade for him at the deadline and the offers will be few and of the garage sale variety come July.

Remember, this list is about things the Blues need to do to make the playoffs. So Keith Tkachuk has to keep playing like he's closing in on 27 instead of 37. He's scored 15 goals and is still formidable in front of the net on the power play. And if there is any doubt about the Blues' fortunes in about a month, the franchise would be foolish not to deal him. How much they could get in return or where he might go are fucking mysteries. But have no doubt that there would be interest in him.

Andy Murray can't get in the way. If you look at how the Blues have finished the last few seasons with him behind the bench, they've petered out. Some promising play in the middle of the season usually leads to lackadaisical efforts and disappointing outcomes down the stretch. Part of it has been the annual exodus of talent with trades at the deadline. Other seasons it's been injuries. Seeing as how the injuries have already happened to this team and only Tkachuk seems likely to be on the trade block, the Blues might actually be in position to make a run...if things happen how the Blues need.

It starts tonight against Ottawa, a team with fewer wings and points than the Blues. Tied with Atlanta with 39 points, the Senators are only better than the lowly New York Islanders. It's a far cry when the Senators were in the Stanley Cup Finals not that long ago.

We might see the Blues take the next step in making this a respectable season, or see that they're prepared to go out with a whimper like they have every season since the lockout.