The odds are in the Blues' favor that they will play a strong game tonight against Philadelphia. After all, the Flyers are a pretty damn good team. Therefore, the Blues probably won't play like crap.

If you look at the Blues' schedule this season, they've played well in games they had no business being competitive in and they've struggled against teams they should have handled without much effort. Thursday's disappointing loss to the Ottawa Senators was just the latest in a weird trend that has done as much as the team's injury problems to sink this season.

In just the second game on the schedule, the Blues lost to the New York Islanders, the odds on favorite to be drafting first overall in the NHL Entry Draft come this summer. The Blues have played the Los Angeles Kings three games this season. They've lost all three games. What's worse, none of them have been competitive. The combined score in the three losses is an astounding 15-5. The Kings are 20-20-7, tied for 12th in the Western Conference. The Blues are 0-2 against the Oilers, a team that seems to be more interested in getting its coach fired than winning games. Of course losses to Detroit and other top teams kind of threaten my theory, but I'll ignore that fact and keep moving on.

Tonight is the showdown of Sarah Palin's favorite NHL teams. 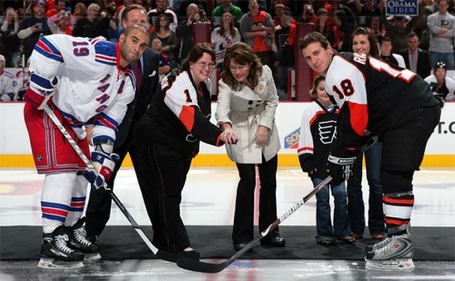 No idea the lines, who's starting in net or anything that's going on. Call us blissfully unaware. Fill up the comments. We'll see you soon.