Where Are They Now - Tyson Nash

Share All sharing options for: Where Are They Now - Tyson Nash

Tyson Nash, the man who helped launch a nation of agitators who would rarely fight back but drew more than their fair share of penalties, is no longer in the NHL. 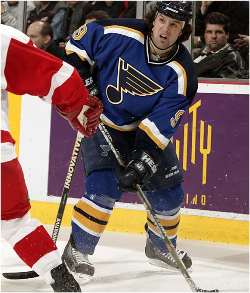 After seven years in the NHL (the first five in St. Louis), Nash announced his retirement earlier this season. His career totals (he never played more than 69 games in any one season) were 374 games played, 27 goals, 37 assists and 673 PIM.

And despite ESPN's claim that he was drafted in the 1st round, 247th overall, for his lack of true NHL talents, he had quite the extended career.

Known in St. Louis for his pinball style of play and hair that made the ladies swoon, his No. 9 jersey is still seen at home games at the DrinkScotch Center.

But where is he now? And what of his hair? you ask.

The unofficially official website of the man, the myth, the sweet coif announced that Tyson Nash has hit the former-NHLer jackpot: he's a new announcer for the Phoenix Coyotes. More specifically, he's the radio color commentator for the team.

Sweet bliss. You get to stay around the game, be with the team, you don't get hit anymore and as the color guy, really don't have to kill yourself with research. Good for him.

Finally, here's some classic Nash for you:

Special thanks to Dan D for the tip on Tyson.