Share All sharing options for: Keith Tkachuk Fills A Quota

So, as you all already know, Keith Tkachuk is now a five-time All-Star. Whether he deserves it or not is a different issue. Whether we laugh or not when we hear that his middle name is Matthew is not up for discussion. (We do, though. Matthew. Look at him and think 'Matthew' and try not to chuckle. We dare you.)

And while we'd bet that Patrik Berglund is going to be in the YoungStars game and therefore easily passed over for this game, we'd be willing to make the argument that if, by rules, the NHL had to pick one Blue for the team, it should have been Brad Boyes.

And we're pretty sure that Tkachuk would have been happy for him. 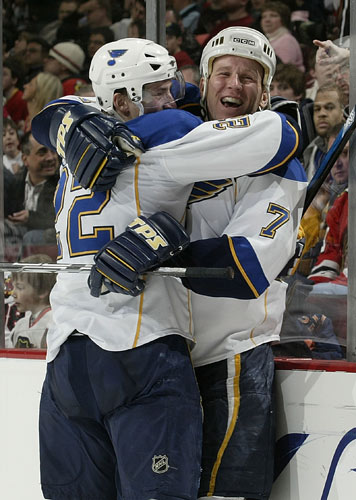 You know, in a purely manly way. Whee!

But really, Tkachuk has to be looking at this selection like a mercy fuck: he didn't really deserve it, but you know what? Why would you turn it down?

For a guy who is going to have classic 'Should He Make The Hall?' discussions swirling around him about six-to-ten years from now, getting another All-Star selection helps push him further into contention, especially once he gets past first-ballot territory.

(When the day comes, the issues on his resume will be about the post-season: possibly zero Cups, and his dismal post-season performances which include, to date, only one appearance beyond the first round, and just 28 goals and 56 points in 85 playoff games. Then again, Bernie Federko got in with shittier numbers, fewer All-Star appearances and zero Cups. We love the guy, the bar has been lowered a tad.) 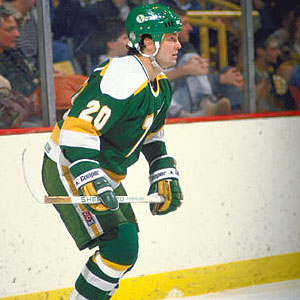 But that's not for now. What is for now is that Tkachuk was selected for the All-Star game based on milestones. He reached the 500 goals and 1,000 points plateaus since the last All-Star game, so he was selected.

Those milestones make him a storyline. The All-Star game is all about easily-digestable story lines.

As Brad Lee pointed out during that cage-match of a live blog that SBN and Puck Daddy hosted during the Winter Classic, these events are not for us. We, hardcore hockey fans, we're already in. We'll watch these gimmicked-up events because we love the game and hope to see that moment when Owen Nolan comes in on a breakaway, points at goalie Dominik Hasek, and then beats him up high.

We'll be there. The NHL doesn't give a flying fuck about catering to us on these games, because they're already counting our numbers.

The NHL is trying to put together rosters of easy storylines and jump-cut montages that have that same-old Saliva song blasting away over the top to lure in the average football fan who stumbles onto the broadcast or the future puckbunny who thinks Channel 5 is showing re-runs of 'Rock of Love' at noon on a Saturday and subsequently falls in love with the come-hither subtelty and flowing locks of Brian Campbell.

Or if not that, then the mystery that is Pavel Datsyuk.

Hi, I'm a stalker and I want to eat your face.

So, considering that Tkachuk is the better story, yes, he is the best choice from the Blues.

But Bradley Boyes should be the Blues' representative in this year's All-Star game. Boyes, whose middle name is Keith, strangely enough, has led the team in scoring for two years. Last year he led the team with 43 goals and 65 points (Kariya also had 65 points) and this year he is in front in both categories with 18 goals and 34 points.

Brad Boyes is the Blues best player at this point in time. He should be their All-Star representative.

I'd be a lot more outraged except for just one fact: The All-Star game is a joke. Seriously. That gets me through and it should get you through.

I hope it gets Bradley Keith Boyes through. His commercial makes it seem as though he might.