It almost feels weird that the Blues haven't had a loss in seven days. Of course they only have one win during that time...in one game. The Blues return to action at Vancouver tonight just after 9 p.m. It's a big deal for the local team as this one European guy is playing his first home game. 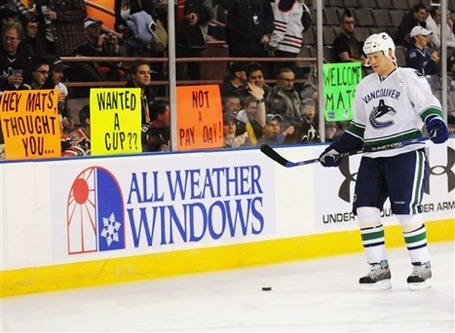 This could be an interesting game to watch. Will the Blues look rusty with five full days off? In his second game of the season, how will new Canucks center Mats Sundin look? Will the bad blood between the two front offices trickle down to the ice?

Mats Sundin was held scoreless in his debut with Vancouver Wednesday night. He played 24 shifts for 15:02 minutes of ice time. He registered no goals, assists, penalty minutes or shots on net. What that means is he's due to get at least an assist against the Blues. In 1,306 career games, he has 1,321 points. It's interesting that Sundin, a Swede, has only played for Canadian teams. His 555 career goals only trails Wayne Gretzky for most goals scored for teams based north of the border.

This past summer the Canucks made Blues forward David Backes a more expensive player than they expected. Vancouver signed the restricted free agent to a three-year deal worth more than $7 million. The Blues wasted less than two full hours to match the offer sheet. The front office took it as an attack and signed restricted free agent Steve Bernier with the Canucks to a contract worth a similar amount. It was a clear "screw you" move by the Blues.

Who has gotten the better of the signings? Well Bernier got hot Wednesday night against Edmonton and scored two goals and assist earning the game's No. 1 star. He has nine goals and 13 assists on the season. Backes meanwhile has 12 goals and seven assists. He also leads the team in penalty minutes with 113. Goals are harder to come by and Backes has played a physical style all season, so the Blues are probably satisfied with how the situation has turned out so far.

We'll see you around game time here at Game TIme. Do us proud and fill up the comments.