Share All sharing options for: I'm Sorry, The Correct Answer Was Andy McDonald 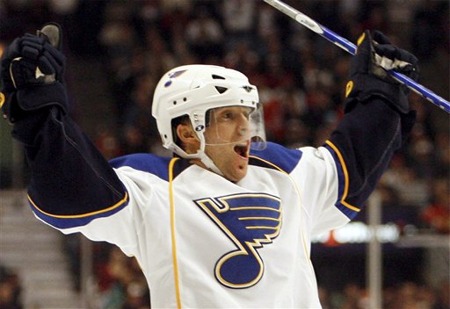 In our poll yesterday, Keith Tkachuk was the winning vote getter. I'm not saying all those people who chose Grandpa Walt are wrong, but the better choice was Andy McDonald. Don't worry, I'll explain.

Just in terms of on-ice observations, McDonald is Tasmanian Devil. He's the fastest skater for the Blues. And while he's undersized, the man doesn't fear anything. He skates hard into the corners, he can take contact, he wins battles along the boards. He's killer on the power play, but not just as a perimeter player. He can work in tight and doesn't mind traffic. He makes the power play go.

In one of the prettiest goals of the season for the Blues (granted, there aren't a lot to choose from), McDonald was on the edge of the Detroit crease when the puck came in. He hopped and spun in the air sweeping the puck around the goaltender and into the net. He made it look easy when it was a difficult, split-second play that required vision, imagination and some nifty skating. You can count on one hand how many other Blues players could make that play. But that's not looking at the statistics.

Sure, McDonald has three points in four games -- less than Tkachuk. But they'll come. Last season McDonald started the season with 18 points in 16 games before he broke his ankle sliding into the boards. He finished the season with 44 points in 46 games. Granted that's last season and not "now" like we talked about yesterday, but I'm the one writing the post.

McDonald was invited to the Canadian Olympic hockey camp this past summer. TSN said he "initially seemed an odd choice." And then they made the case of how he's good on the power play, fast and a point-per-game player when healthy (do the Blues have any other guys who could be described that way?). And the other Blues players invited to Team Canada's camp included...wait for it...wait for it...nobody.

When you add in the fact that whenever he scores tat commenters in the game day threads post pictures of Happy Meals and Hamburglars and Grimaces and the phrase "I'm Lovin' It," it's clear that Andy McDonald is the best player on the team. Whatever line he plays on is the No. 1. Whatever power play unit he's on is the top. Every shift he's a threat to make a play. Hopefully there will be other players we can describe that way by the end of the season, but right now, it's just No. 10.

Grill me in the comments.