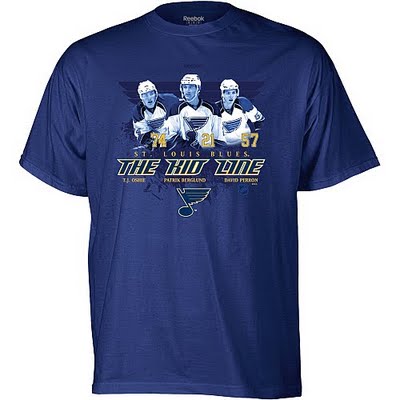 Reunited, and it feels soooo good.

The Blues haven't won since Oct. 3. That was in Europe. Hopefully the Blues can get something going in the state of limbo where the Coyotes have been hanging out for months with their longterm future more up in the air than the Balloon Boy (rimshot).

As you might have heard on the pregame or seen on the shirt above, David Perron, Patrik Berglund and the T.J. Oshie are being reuinted as "The Kid Line." So unoriginal. I liked "Are You Down With OPB?" but it never caught on. RIP Naughty By Nature.

As Sean and I talked in the afternoon staff meeting, if the Blues don't play well tonight and come away with no points tonight, the sky will be falling faster than a homemade UFO helium balloon (ZING!).

Ok. Enough crap. The Blues in recent past have taken teams like Phoenix for granted. This isn't a crappy team. The Blues will have to play well enough to win to get the two points.

Don't forget our friend Odin Mercer over at Five For Howling. Even if he does use Blues Clues to represent St. Louis.

Game time is now. Fill 'em up down below.