What Americans 'Know' About Sweden

Share All sharing options for: What Americans 'Know' About Sweden 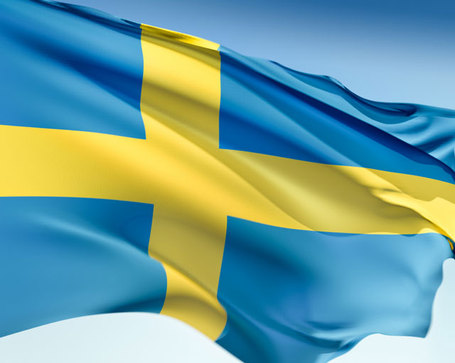 As you've probably read around here, the Blues are in Sweden for a couple games. Obviously most of us didn't have the opportunity to go over and see the games in person. And that means we're not experiencing the Swedish culture. So while we're not there, our resident Swedish Blues fan was kind enough to read some of our strongly held beliefs about the country, its people and culture.

What follows is one dumb American's beliefs that are probably somewhat representative of what most Americans know about Sweden and a Swedish person's smartass responses to said beliefs. And when I say "most" Americans, I mean "drunk" Americans.

Brad: I think I've seen this on the National Geographic Channel while waiting for a special on topless African bush women. I'm pretty sure every Swede is blond. Well except for young girls who go brunette because they want to stand out in a crowd. And any child who doesn't have blond hair, they're marched into Norway for relocation.
Marcus: Yes, this is indeed true. Norway is, as we all know, hell on earth. So most dark-haired people who realize they're about to be deported color their hair blond. The Swedish Migration Board is well aware of this problem and therefore conducts so-called "flash searches" on suspicious looking people. They simply force people to pull their pants down. Checkity-check. Brown hair? Off to Norway, you bastard. It really is an easy and efficient way to learn people's true hair color. Smart, eh? So yeah, everybody here is blond. Hell, even the King of Sweden is blond!

Brad: This one, I'm pretty sure about. The most profitable corporation in Sweden makes breath mints. To cover up all that pickled herring breath.
Marcus: This is also true. Pickled herring breath is the No. 1 health problem in my country, edging out diseases such as slash-by-polar bear and suffocation due to meatball farting. All these things are serious here in Sweden and not to be taken lightly.

Brad: I think Bob Costas on the Winter Olympics told me that the national sport is speed skating. And all children do a biathlon to school.
Marcus: Actually, the Swedish National sport is a game called Ice-Hockey. Speed skating is for brown-haired Norwegians and other quasi-people. They suck.

Brad: Sweden's meatballs kick every other country's ass in not only taste but construction. In fact some buildings are made out of Swedish meatballs.
Marcus: Another true statement. You're good at this, Brad! The most famous meatball building is of course the Royal Castle in Stockholm. And while it's not made out of meatballs, the design for the Ericsson Globe Arena was in fact constructed as an homage to the meatball. Well, at least it looks like an old, disgusting, rotten meatball which has been left in the sun and thus turning it white. As to the taste --what?-- are you gonna say that some other country's meatballs are better tasting than the Swedish version? What country's? Turkish meatballs? Mongolian meatballs? Never even heard of them.

Brad: The most respected and yet misunderstood occupation in Sweden is that of the chef. They all mumble, have huge mustaches and are hilarious.
Marcus: Yes, this is true. Oh, to be a misunderstood, mustache-wearing, mumbling, hilarious chef with a hand up the butt. Then I'd get some respect.

Brad: The greatest invention in the history of Sweden is the bikini team. Thank you, by the way.
Marcus: You're very welcome. It is true that all Swedish women are bikini models. We Swedish men like that, thankyouverymuch. Other facts: we also have polar bears roaming our streets, it's always snowing, and once a penguin flew in through my window. No wait, penguins don't fly. He must have been jumping really far.

Brad: Finland wishes it was as cool as Sweden.
Marcus: Finland is to Sweden what Canada is to the U.S. When it's not about hockey, no one really cares about them. Dorks.

Brad: In Sweden, all the diehard hockey fans stay up all night watching NHL games over balky Internet feeds while making comments on blogs, with these activities threatening their love lives and professional careers.
Marcus: No, that's just me.