Part 2 of 'Behind the Scenes at Gameday in Sweden': John Davidson, Chris Kerber and Andy McDonald

Share All sharing options for: Part 2 of 'Behind the Scenes at Gameday in Sweden': John Davidson, Chris Kerber and Andy McDonald

Here it is.... Like I promised, PART 2 of the 'Behind the scenes at Gameday'... Featuring John Davidson. Featuring Chris Kerber. And featuring Andy McDonald. Talking about lots of things, including... *drums please* St. Louis Game Time.

It was a nice combination for me: interviewing them for my own articles and at the same time use it to give you some info about what's going on here. So read on and see for yourself what 'JD', 'Kerbs' (as you Americans seem to call them) and McDonald have to say... Enjoy part 2 of this behind the scenes at game day!!

Quotes, pics and a video from near the locker room.... Have fun!.. Read on, hope you like it.

Okay, imagine this.
You're a Dutch journalist, reporting at an American game in the country of Sweden. But as long as you have the right accreditation (credentials, press pass, whatever you wanna call it) doors will open everywhere.  But I didn't think it would be so easy to interview gentlemen like John Davidson for example... But I succeeded and here's what he had to say...

I walked up to Mister Davidson in the stands, where he was sitting together with his crutches. ,,I have a bad knee", said Davidson, who displayed a good sense of humor shortly after, "I didn't see much of the city. My wife did. But I saw a couple of nice restaurants though."

Davidson stated that it's positive for the Blues to be involved in the NHL Premiere in Stockholm "because it's good for the players to have this experience. We have a lot of young guys on the team and they can use it."

For the promotion of the Blues as a club it's also a good thing, according to Davidson. "It's obvious Detroit is pretty popular in Sweden, in Europe even. But for us as a club, to promote the Blue Note, it's good that European hockey fans get to see us as well."

And ofcourse talking to Davidson, I asked him what he thought of you Game Timers. He talked with pride about the hockey fans in St. Louis. And he went on saying that it's nice that GT has some people over here keeping you posted. "Because", said Davidson, "for the fans at home in St. Louis it's nice to know what's going on here."

Chris Kerber knows Game Time well, he said. I spoke to him about it and about the Blues trip to Sweden. ,"Game Time, I know those guys, yes", Kerber smiled. "It's a nice website. The people at Game Time are funny. And sometimes sarcastic at times." He was full of praise.

Andy McDonald said he didn't know about Game Time. Well, my American friends, he does now.

On a sidenote: in Euorpean sports is not common at all to do interviews in the dressing room.... We are often not allowed in there.... So your special reporter overhere was very surprised that you Americans do it that way...

Here's how it went with Andy McDonald, after the Morning Skate:

- "Hi Andy, I'm Gerard. Can I ask you a couple of questions?"
- "Sure, no problem. You wanna go inside?" (pointing to the dressing room, locker room, whatever you guys call it)

Now, in general, that won't happen at all in Europe.
Amazing. World class hockey players, but no arrogancy whatsoever. Thumbs up!

Back to the conversation though.

McDonald said the team was enjoying itself this week. ,"Scavenger hunt was nice. We got to see something of the city." It's not his first time in Europe though. "During the lockout I played in Germany."

"It's a nice city, the people are also very nice here in Sweden. It's been a lot of fun so far", he went on to say. "And for the team it's great to have a trip like this. To get away with each other is good for the team."

Kerber agreed with him. "It's been fantastic for everybody involved. Making a trip like this to Stockholm is nice, seeing other cultures. It's an eye-opener. And a privilige."

The broadcaster thinks highly of the Blues team. "The players are dedicated. And they showed that already on day 1 of training camp."

McDonald knows the Globe Arena tonight and tomorrow probably will be filled with more Detroit than St. Louis fans. "I think our fans will be outnumbered, yes. But we'll enjoy it anyway, knowing that at home the fans are supporting us as well."

When asked about Game Time, he look puzzled. "I don't know it yet. Well, now I do. But I know our fans are great. Blues fans are very passionate."

And then, McDonald ended the conversation with that one thing we have all set our minds too. "Taking four points away from Detroit, that would be nice." He said it with a smile.

And he is soooooooooo right.

A sneak peak near the dressing room (via BoskeLogan) 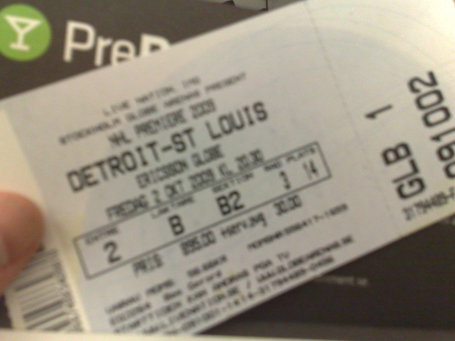 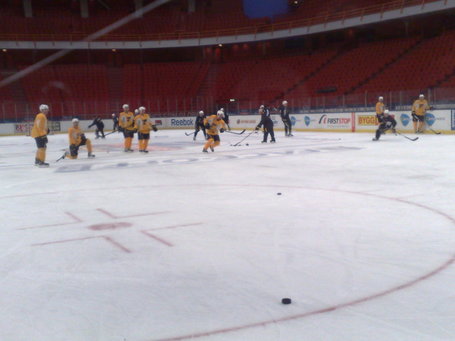 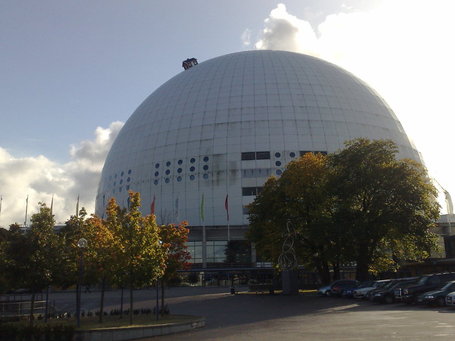 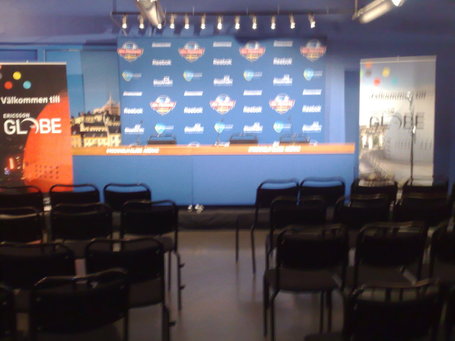 So, that's all...John Davidson, Chris Kerber and Andy McDonald about Sweden, the Blues and Game Time...

Enjoy the game, folks! (and I will try to meetup tonight as a spectator with DanGNR and BlueMonday... and we will get back to you later, also with Marcus overhere reporting!)

hope you liked it!