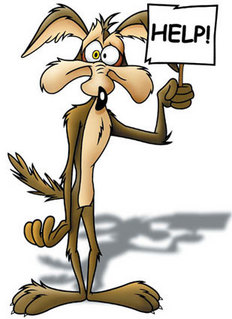 Free, to a good home.

(QUICK NOTE: Once or twice a year we offer the paper we sell outside games for free during a GDT. This is one of those nights. So e-mail me at gtbradleeATgmail.com and you'll get an e-mail with the paper in pdf form. We offer subscriptions for just $2 an issue, so if you're interested, drop us a line. We probably won't have a sneak peak like this again for awhile, so enjoy it while it lasts.)

How are the Phoenix Coyotes winning games? In case you haven't heard, the desert dogs have been in bankruptcy in an effort to get the team sold. Here's a recap:

Jerry Moyes talked the city of Glendale, Ariz. into building a nice new arena several minutes from downtown Phoenix. He promised lots of people who would spend money before and after the game that would help the arena pay for itself. While he was worried with that, the team went down the shitter under the watch of former head coach and part owner Wayne Gretzky. Oops. So the fans stopped driving out for the games. Moyes started losing his shirt and he wanted out. Suddenly the guy that invented the Blackberry got involved to buy the team to move it to Hamilton, Ontario in Canada. Moyes declared bankruptcy and Jim Blackberry Balsillie swooped in with a sweetheart offer that he and Moyes both thought the bankruptcy court would have to accept because it was so good. A few other groups emerged including the NHL itself and Ice Edge Holdings, a group that promised five "home" games to Saskatoon. Yes, the same Saskatoon that was this close to buying the Blues. The league unanimously voted against Blackberry man from joining the exclusive club, the judge rejected all the bids and suddenly this week it seems Ice Edge is going to bail out the league and possibly buy the team any day now. It cost Gretzky his job, Moyes millions and Bettman's credibility on sun-belt hockey.

The limbo has taken its toll on the franchise. Media reports say the team has lost $10 million since July 1, and that's with a roster barely above the salary floor. On Oct. 15 when the Blues traveled to Phoenix and lost in overtime (on a goal I swear Ed Jovanovski deflected intentionally with his glove, no matter what the war room in Toronot says), the estimated actual attendance was about 5,000 people. That's worse than any ice-storm night when the Blues were in limbo under Bill and Money Laurie back in the day. I bet pro wrasslin' draws better than that. It's no wonder people in Ontario who can't get into Leafs games with minimum ticket prices of $80 are so desperate to get a team when they see that kind of support for the Coyotes. Full disclosure: the Yotes did "sell out" their first home game, but some tickets were about as cheap as this hockey rag.

So all this happens around the team. The front office with no long-term plan, vision or leadership acquired 12 players this summer. Twelve. They've got a lot of young guys, some cheap guys, a few veterans...and they're 7-4-1. For a valid comparison, the Blues are 5-4-1. Prevailing logic would say the Yotes are the team in the NHL that should have one win on the season. It would be easy to predict the entire roster giving up on the season, playing the legitimate red-headed stepchild role. Instead, they're putting up a fight.

The Blues suffered an overtime loss in Phoenix earlier this month. A winning streak would be really nice. Is that too much to ask? Don't answer that.

Oh, Eric Brewer is expected to shake the rust off and play for the first time in a long while. That'll be something to see.

This is your game day thread. Boot up, tune in and get ready to watch the robot play. Get to work.