You Want A Game Day Pre-Party? Check Out Who's Coming.

Share All sharing options for: You Want A Game Day Pre-Party? Check Out Who's Coming.

We all know (whether some of us want to admit it or not) that the greatest thing to ever come out of Sweden is the band ABBA.

But today we have a chance to top ABBA's contribution to the States in one important way: The Blues could win again and take four points from the Wings and plenty of pride and condescension from all of their greasy, unknowledgeable, unfunny fans.

That, and only that, would be better than ABBA.

So, this is your tailgate/pre-party thread to get ready for the game at 2 Central (on FSN-Midwest; though beware, it's a split broadcast today, meaning that FSN-Detroit has a guy in the booth and will be handling the pre-game and post-game duties. Not just Fuck Detroit today, Fuck FSN today too. Right in the earhole, as a certain reader from Detroit is fond of telling us.).

We'll have a GDT open early for you to migrate to, but for now we give you a little bit of greatness courtesy of Mr. Particle (the genius who also gave us Marilyn Monroe McKee).

Yes, apparently those assholes from Detroit are "going Sweden" as hard as anyone. 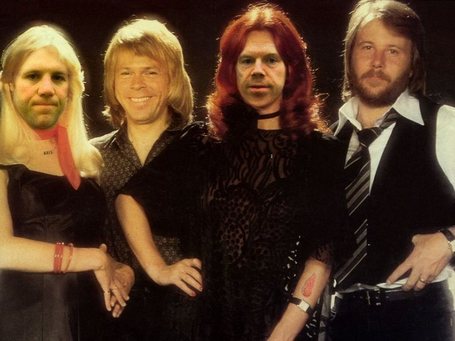 Three Schrutebucks (or the equivalent amount of Stanley Nickels) to the first person to properly identify Agnetha Maltby's personalized jewelry.