Share All sharing options for: Reporting from Sweden: 16 things you didn't know from last night's Blues vs Red Wings Game

Okay, Detroit won the battle of which team had the most fans in the building. But who gives a s***? I know I don't. The Blues won the battle for two points. That's what matters.And to make the night complete: all Game Timers present in Stockholm had a succesful and good meet up.

You've probably read all the reports about last nights game, heard the interviews, saw the game, or at least the goals. So let me just skip that stuff and get to the point: because what you didn't see was how the Game Timers overhere followed the game and what happened to them.... So here's a list of 16 things you didn't know from last night's Blues game!

Once again, read on, my fellow fans of the joyful #1 team in the Central Division standings...! Pics and vids at the bottom... Enjoy.

You knew the Blues would win.
You knew Kariya would score. Twice even.
You knew us Blues fans overhere would say Fuck Detroit every time some Swedish fan was chanting 'Let's go Red Wings'.

But, in random order, did you also know that...

1... DanGNR, BlueMonday and FanfromEurope (me) had a succesful meet up at the game?
2... Except for Dan (who was in a Blues section), BlueMonday and his girlfriend were in a quiet section, just like me?
3... I was told to 'sit my ass down' after I was cheering when the Blues took a 1-0 lead?
4... it was no suprise to see that the guy who said it was wearing a Red Wings jersey?
5... I gave him a VERY meaningful look and VERY big smile after the Blues came back from 3-1 down to 4-3 (and that I enjoyed seeing his frustrated look)?
6... DanGNR and his wife were shown on the Jumbotron screen during the game?
7... DanGNR proudly showed the St Louis Game Time logo?
8... BlueMonday and his girlfriend were cheering so lively that a Swedish dude insisted on taking a picture of them?
9... I made a mistake when I thought somebody else was DanGNR? (they really looked alike and I went up saying: You must be Dan. And he said: Yes! Weird coincidence...)
10... the Blues fans were completely outnumbered?
11... it made the taste of victory even much more sweeter?
12... after the game I went in a bar with my Blues shirt on, and that I met Peter Forsbergs niece? (at least she said so)
13... she turned out to be a great kisser?????? (seriously!)
14... tonight Marcus E. Petterson will join us for a second 'European Game Time Meet up'?
15... DanGNR took a picture of those who were there?
16... we will have four points after tonight?

And, like I heard many locals say on the streets and in the bars afterwards: Let's Go Bluuuuuuuueeessss!!!

Here's the pics and vids I promised!

a view backstage, from Mixed zone to Teams entry onto the ice (via BoskeLogan)

A short impression (via BoskeLogan)

Failed powerplay of the Blues (via BoskeLogan) 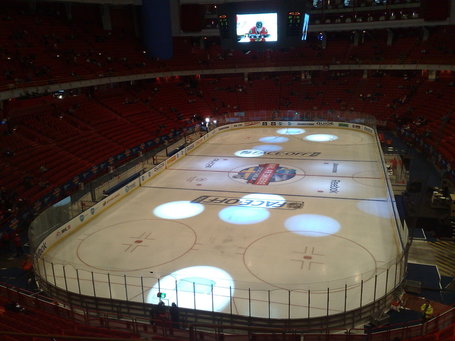 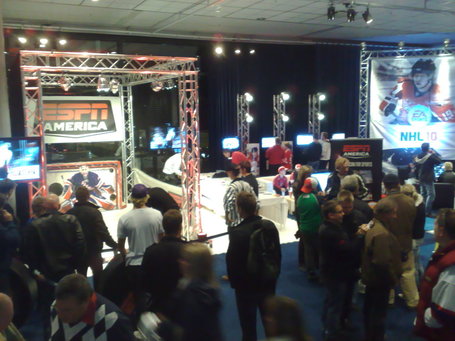 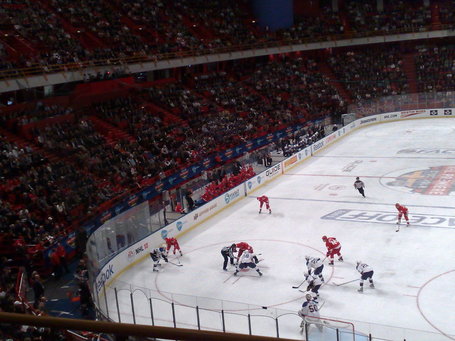 Enjoy the 2nd game! And as we would say in Dutch: Zie je later.