A Wrap-Up From Sweden

Share All sharing options for: A Wrap-Up From Sweden

I'm not going to report much from the Swedish games. Gerard and DanGNR is doing such a great job at bringing you all that went down, plus with everything being written in the PD and on the Blues site etc, what's the use? I will say however that I had a blast seeing NHL-hockey in Stockholm, and it was absolutely fantastic meeting DanGNR (and wife), Gerard and ingmarWbergman. You guys make me want to go over to St Louis to experience the real deal. I'm saving up and coming over soon. Promise.

So what's on my mind? Well, as you might recall, a few weeks back I wrote about how the Blues were viewed as big underdogs by the Swedish media. And especially how Swedish newspaper Aftonbladet pictured the Globe Arena with a big Red Wing on it, and so on. Well, just to follow up, here's what the papers pages looked after the games. 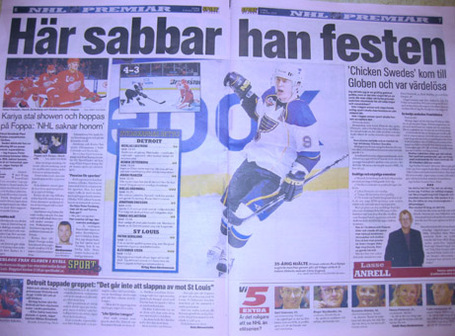 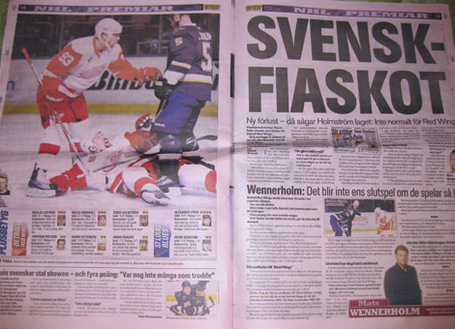 "The Swede Fiasco". Jackman is king in that photo.

Well, we sure showed those asshats.