Ok, yes, this is a completely random topic (and I'm sorry for the delay today - yesterday and today can go die in a fire, and for some reason I have about a bajillion papers to read and grade that are taunting me). But, I promise, something happened to make me think about it a little more. I saw a goaltender who was a rookie, yes, but still old enough to know better, get called on a 2 minute delay of game penalty for playing the puck outside of the trapezoid area behind the net.

I was frustrated at myself when I wasn't paying attention and let my goalie do that on NHL 10, but that's a video game, and this was real life. That stupid penalty led to a power play goal by the other team, messed up that goalie's concentration (I think) and led to an extremely awful game by him.

It got me thinking... is the trapezoid rule even really legit? And, what about the other rules the league places on goalies, like the shrinkage (of the pads, people) mandates? Are we getting too hard on them, while being too coddling to the offense?

Goalies Need to Rely on their Skills More

Immediately after the lock-out, the trapezoid rule was written into the books. In basic terms, it means that if the goaltender plays the puck in the area behind the goal line on either side of the trapezoid behind the goal, then a two minute penalty for delay of game is called, even if it's the goalie reflexively covering the puck to stop play. This rule was written with one specific goaltender in mind, Martin Brodeur. His puck handling skills are outstanding, and apparently placed other teams at such a disadvantage that they felt the need to make a rule for it (no clue as to if it comes off the books when Marty retires).

Does this limit the play of the goaltender? As far as immediate covering of the puck, yes, it places both the goaltender and the defending team at an increased risk of a goal. In the new "offense first" style of the league, this doesn't seem to be an issue... at least to the team on the offense. Frankly, goalies wandering too far from the goal can be a bigger problem than just letting a player get to the puck first. Nikolai Khabibulin's screw up the other night cost the Oilers the extra point at the very least. Do you really want to encourage a goalie to float to the corner of the rink to get a puck? Unless it's Brodeur or Turco (in a good year), I'd rather see my goalie tethered to the net.

Also, there has been talk of the limit of the size of the goaltenders' pads. Through the years, pads have grown increasingly larger with increasingly smaller GAA. (the SV% seems to have maintained a little bit). Let's look at the stats of everyone's favorite "How long did he play?" goalie, Curtis Joseph. During the beginning of his career, his GAA was between 3.38 and 2.93, with a trend (though not steady) of going down. His rookie year was 1990-1991, and he was the buzz of St. Louis during his time with the team. Now a goalie with his stats would be a backup, or probably in the AHL. What led to the decline in GAA to down to a number of 2.23? Let's look at this: 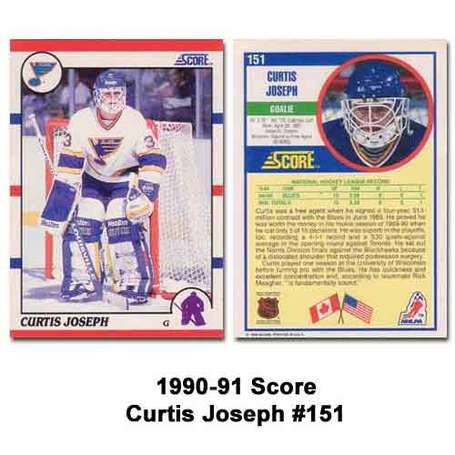 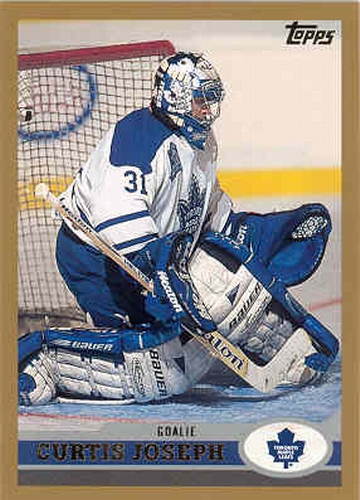 That should tell you everything you need to know.

Basically, I'm going to leave it to the words of Manny Legace for this part. Basically, he called out Bettman on the air during the 2008 All Star Game. Bettman was discussing equipment changes, and Legace called bunk, saying that if they decrease the size of his pads, he'll be killed out there because he's so tiny (yes, this might have something to do with the Legace v. Kolzig pad kerfluffle a while back). A lot of goalies have come of age in the era where huge padding is the norm, and they rely on it for safety as well as puck stopping abilities. What'd happen to the kids there now? Would Carey Price (and sorry for the comparison) be able to play like Roy did in 1986 if he had to wear the same pads?

Actually, can Carey Price ever play like Roy did should be where I leave that question...