Late last week we had a contest asking you our fair readers what the hell is wrong with the St. Louis Blues. The most creative entry won tickets to a game. We got a few submissions, but one was clearly the best/most creative/most out there. It's from our commenter RFJCC. He uses important physics lessons to explain why the Blues aren't winning. It's all very technical, but he explains it well. Congratulations, sir.

A Physicist's Take on The Woes of The St. Louis Blues

Needless to say, the past month has been painful for Blues fans. We've watched our beloved team stumble out of the gate like a drunken frat boy and nobody can offer a decent explanation why. Sure you can blame Andy Murray, the slow starts by three-fourths of the team, or even just put all the blame on Eric Brewer because he is a robot and has no feeling anyway.

However, if they team would merely request the help of a physicist (I do freelance work) all of their problems would be solved, since any physicist can observe that the Blues are trying to contradict a large portion of the physical laws and theories that govern the universe. Let's take a look at the problems with the Blue Note from the point of view of a physicist. Make sure your safety goggles are on and that you remembered your cup, because this is gonna get rough. (Theoretically speaking, of course).

1. Kepler's Law of Planetary Motion: According to Kepler, all planets in our solar system follow an elliptical orbit with the sun at one of the focuses of the ellipse.  Simply put, the Sun is in fact the center of the universe. (Yes Copernicus said this first, but Kepler wrote the laws)
How it applies to the Blues: Dear T.J. Oshie, you are NOT the center of the solar system. Yes, last season we chanted your name, tried to make you mayor, and even stuffed the ballot box to give you the NHL goal of the year, but what have you done for us lately?  You need to stop acting like hot shit, because compared to the sun you're hovering just above absolute zero. Sure women say you're smoking hot, but the core of the sun is 15.7x10^6 Kelvin. That's one overcooked hot pocket hot. You just can't compete with that. Seriously, until you gain the ability to constantly fuse hydrogen atoms together to form helium, go back to playing hockey like you've got something to prove. Kepler is right, you're wrong.

2. Newton's First Law of Motion: Every object in a state of uniform motion tends to remain in that state of motion unless an external force is applied to it.
How it applies to the Blues: You guys need to start hitting like Ike Turner on his wedding night. Not happy with the motion of the game? Try applying some extreme force to the other team and see if that changes anything. According to Newton, this will most likely work and at the very least you'll get the fans back into the game.

3. Newton's Second Law of Motion: The relationship between an object's mass (m), it's acceleration (a), and the applied force (F) is F=ma. Therefore the force applied by an object is equal to the multiple of its mass and its acceleration.
How it applies to the Blues: Um David Backes you're what, 6'3 and 225 pounds? Why are you not laying the hammer down on people? You need to get in there and throw your weight around like Walt when he's trying to get the last doughnut. So plant that big body in front of the net and take control of the physical play; physics is behind you on this one.

4. Newton's Third Law of Motion: For every action there is an equal and opposite reaction.
How it applies to the Blues: Next time you guys play the Stars, Steve Ott dies.

5. The Conservation of Energy: The total amount of energy put into a closed system remains constant. Energy cannot be created or destroyed, it merely changes forms.
How it applies to the Blues: It's simple, each game is a closed system so you're only gonna get out what you put in. Most of the time the Blues hit the ice with about as much energy as a diabetic in need of some ice cream. Energy output isn't free guys, you've gotta work for it. Try starting games with loads more energy and I guarantee you'll like the output.

6. Schrödinger Equation: This one is tough to explain, so I'm just gonna show the math... 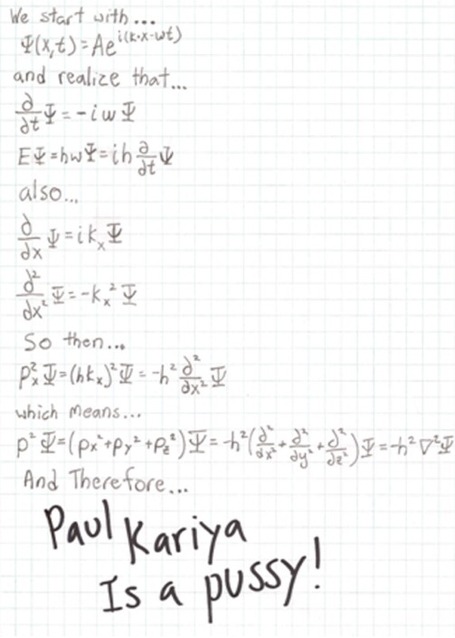 7.Heisenberg Uncertainty Principle: In quantum mechanics, certain physical properties like position and momentum cannot both be known to the same arbitrary precision at the same time. Basically if you know one value, the other value cannot be determined to the same precision, causing uncertainty with regards to its actual value.
How it applies to the Blues: Dear Mr. Boyes, every time you take a shot, you go for both accuracy and velocity. However you seem to be unable to hit the net at all. Please take note of the uncertainty principle, and start focusing on your accuracy so you can at least force to goalie to make a save every once in a while.

8. Circuit Theory: When it comes to electric circuits, there are multiple laws and theories that allow you to construct circuits that will maximize current, minimize resistance and won't short out.
How it applies to the Blues: The guy who built Captain Brewer had obviously never heard of circuit theory, because his creation seems to have a truckload of short circuits in it. Somebody needs to open him up and have a look at the wiring before he shorts out again and scores on his own team once more.

There you have it, my physics-influenced view of what is wrong with the Blues. Sure there are a lot of problems but most of them are fixable (I think Brewer might have to be scraped and auctioned off for parts) and with physics guiding them, the team should soon be back on track. Now if you excuse me, I have to get back to my research on finding out the effect glowing pucks had on the time space continuum.