A Blues fan from afar

Share All sharing options for: A Blues fan from afar

So Mr. Gallagher and Mr. Lee asked me to write something for Thursday's paper-version of this Game Time. I, of course, jumped at the chance. This article originally appeared in the Nov. 12 edition of St. Louis Game Time. Enjoy.

It never was supposed to be a fashion statement. In fact, it was mostly just due to laziness. I just didn’t want to shower and mash down my untamed-bed head of hair.

It’s not an outrageous hat, it’s just navy with a Blue note on it. If you could have seen the looks I got, you would have thought I had a deer carcass on my head — well that probably wouldn’t have drawn much attention at the local Walmart, but the point remains: People didn’t know what to make of my hat. I guess people in this part of the country just have never seen Blues apparel. And when I say this part of the country, I’m referring to Northeast Missouri.

I grew up in a small town outside of St. Louis near Cam Janssen-land. Growing up, the winter was time for the Blues. After the Cardinals season ended with a championship, everyone turned their attention to the Blues. St. Louis didn’t have a football team when I was young lad so hockey was it. And it was good. Then, of course, I had to grow up, get a job, and then move away.

Currently, I find myself a 90 mile trip on Northbound Hwy 61 in Hannibal, Mo. Well, currently I find myself at work trying to type this while looking like I’m doing actual work, but anyway, I live about two hours from St. Louis. I had just assumed that since everyone in Missouri rooted for the Cardinals, outside of a few misguided Royals fans, that the rest of the state would be Blues fans. Wrong.

My Blues hat is one-in-a-million in town. If Jon Hamm and his hat of lies (15 years ago the logo had red trim and a St. Louis letter-mark, sir. Still, I love your show.) moved to town, there would be two of us. I have lived here for 11 months and have yet to see another Blues fan. I see Cards hats, NASCAR hats, hats for beer, hats for skoal and hats for tractors. Eleven months in, and no sign of Blues gear. 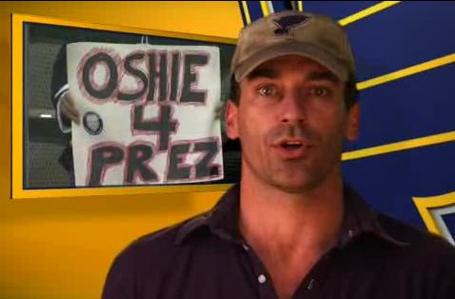 The funny thing is, despite being seemingly a world away from the Blues, I am as big of a fan of the team as I have ever been. Thanks to things like the Internet and cable TV, I can keep up with the team just like I did when I lived in St. Louis. Of course, this year it’s been a little tough to actually watch the games since I get college football instead of Blues’ games thanks to this lovely Mediacom/Dish Network dispute. Thanks, assholes. Way to alienate your fan base over a few bucks that you could easily recoup with some ludicrous fee on my monthly bill. But I digress.

If I had been born two decades earlier, I’m not sure if I’d be a Blues fan right now or even writing for this lovely publication. The local paper in town, the one that gives me money twice a month, doesn’t cover the Blues. Instead they focus on high school sports — as well they/we should. People around here don’t know sticks and pucks, but do know football. I don’t watch local TV news because I would rather Cam Janssen punch me in the face than listen to the forced banter and awkwardly-delivered highlights, but I assume the content is heavily geared toward prep sports. If this were 1989 and not 2009, I have no idea how I would keep in touch with the Blues.

It’s actually kind of fun to be a Blues fan from afar. In some ways, it increases my validation as a fan. It’s easy to keep tabs on the Blues when you can’t get away from the news. I have to seek out the news. I have to pay attention to the schedule to figure out when games are on. I have to put in the effort to keep track of the team. You think it’s easy finding out that T.J. Oshie’s appendix went boom when no one else in town is talking about it? I feel like I put in more effort to watch and enjoy this team, and that’s kinda fun. Now, if only they would start living up to their potential and games like Tuesday would be the norm and not "Holy shit!" blips on the radar.

Even with the funny looks and double takes at my choice of head gear — and I assure you, that it was my hat and not my stunning good looks — I still wear the Blues hat whenever I’m out about town. And even though I’ve had more people tell me "Go Blues!" in Chicago than in Hannibal when I’m wearing the lid, I don’t really care. I don’t care if my neighbors and coworkers don’t know about David Perron or Ian Cole or even Mayor Oshie. For some reason, I’m a fan of this team, and that won’t change no matter where my life takes me.