Wrapping Up The NHL Premiere in Stockholm, Part 1

Share All sharing options for: Wrapping Up The NHL Premiere in Stockholm, Part 1

[With Sweden already a month behind us, here's a final look back by our own DanGNR who attended the event and provided us all with great pictures and video during the trip.]

I was lucky enough to go to Stockholm Sweden for the NHL Premiere Stockholm, between the St. Louis Blues and the .... the... fan ta detroit.  I took LOTS of photos and several videos during our trip, both of the Blues-related activities and the city itself.  I tried to make as many fanposts and fanshots to help show what was going on that other media outlets weren't covering.  But due to time constraints and the fact I didn't want to spend time indoors reading and typing away instead of sight seeing... well I hope you understand.

By the way, this is the picture I took of the celebrity face off: 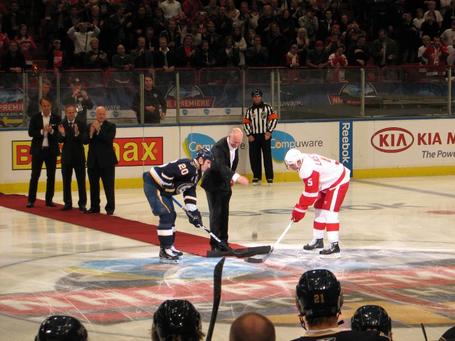 After the jump, the story of what we experienced as well as details that will likely make every one of you jealous (and envious) of those that can now no longer afford to make their mortgage payments for the next year....

Starting with a quick introduction, I am known as DanGNR on this site. Long story short: Back in 1997 I attended my 1st hockey game, a Washington Capitals game out in the old USAir arena on the outskirts of our nation's capital. Fell in love with the game, and soon moved back to my home state of Missouri in 1998 and immediately bought Blues season tickets (much to my wife's chagrin).

Jump forward to the recent past, when the Blues finally made the announcement that they were going to Sweden last spring, I immediately mentioned it to my wife. She isn't much of a hockey fan, but she was all for the idea, pending details of the trip, cost, dates, etc, etc. I constantly called my season ticket sales rep asking when the travel package was going to be finalized and what the cost would be. After calling and emailing her every day for two months straight, they finally came out with the details. I looked it up and I simply said WOW. You want HOW much for only four days? What do you get for the arm and two legs they wanted for this trip?

But I didn't think the wife would be interested in spending a lot of the time doing Blues-related activities such as the practice and both games. I usually can only get her to four or five games a season, and those are usually when my seatmate can't make the game for one reason or another. But I emailed her nonetheless. Her reply? "BOOK-IT!"

No questions on cost or itinerary. She wanted to go to Stockholm.

Being the good husband that I am, I did what I was told.  I called Premiere Sports Travel and booked the package.  I then ran around my office telling everyone (whether they wanted to hear it or not) that we were going to Stockholm to see the Blues play hockey.  I was as giddy as a schoolgirl .... well... a 10 year old at Christmas.

After booking the trip, we then anxiously awaited the detailed itinerary.  They said it was supposed to ship two weeks before departure.  Skipping the boring details, it arrived just one week before our departure date.  We opened it up and went over it like it was a our 1st NHL contract (it cost almost that much I tell ya).

The 1st thing we said after looking it over was "holy shit, when are we going to have time to site-see?"  The schedule was packed full of activities.  Most of the activities were Blues related obviously, but the Palace tour was also on the agenda.

Here is a brief rundown of the schedule.

Wednesday:  After arrival, there were no scheduled activities.  You could site-see all day long (or sleep).

Thursday:  VIP access to Blues practice at the Globen.  After practice was the meet and greet.
The rest of Thursday was free of scheduled activities.  You could site-see all day long (or sleep).

Sunday:  Are you kidding me?  6am departure to go back home?  Fuck.

Note: there were two flights that were available (but we didn't have a choice) to those that booked the air package.  Our flight was on a 757 and arrived at 7am Wednesday, and the other was on a much nicer and bigger 777.  While the other flight was on the better aircraft, it didn't arrive in Stockholm until well after 4pm Wednesday.  I think we got the better deal there.  We had almost a full day of sight-seeing that the others didn't have.

After looking over the paperwork and other materials regarding the trip, I thought it strange that their instructions told us to go to the United ticket counter to check in for our Continental flight.  Strike one for the Premiere Sports Travel folks regarding "attention" to details.  After calling to double check, we were all good to go (i.e. we check in with Continental, not United).

We then arrived at the airport in plenty of time to check in.  Check in was as easy as I have ever had.  We showed up at the United Continental area and there were two Premiere agents with signs for us to check in with them.  They took our passports and checked us in with the Continental folks.  There were approximately 30 other Blues fans going on the same flight.  The Premiere agents came back in about 5 minutes with our passports, boarding passes, and custom made luggage tags. 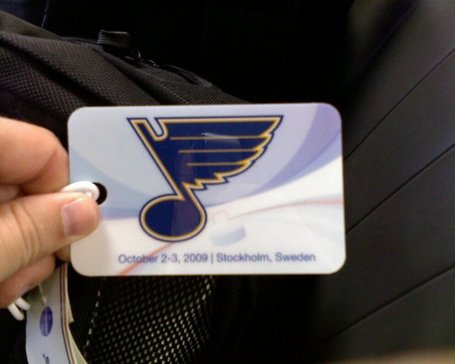 We received four of them. Awesome.  (We are using two and keeping two as souvenirs.)

The flights were fine.  Little over two hours to Newark, NJ.  Then a little over 8 hours to Stockholm, Sweden.

We landed in Stockholm pretty much exactly at sunrise on Wednesday.
What a great way to start our trip.  Seeing the sunrise as we arrive. 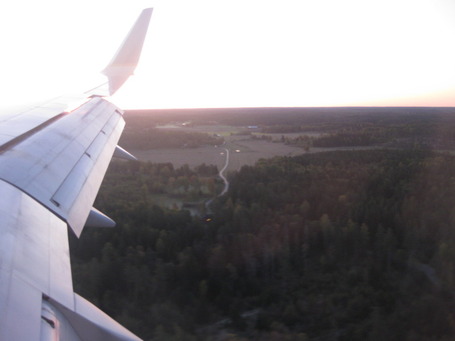 This may likely be the worst of the many parts I am going to write... but I felt it was important to set the stage for the rest of the trip.  I plan to write one part for each day of the trip detailing what we saw and did while on this once in a life-time adventure.  I apologize that my writing quality and style aren't up to the GT standards of Juan, Brad or Hildy, but I hope the content and pics make it a worthy read.