Share All sharing options for: Ice Chips with Coach Oshie

In this issue, I will tackle some great questions sent in by various folks regarding some off-ice work and the 2005 NHL Entry Draft in Ottawa, CA.

It seems like in the three years T.J. played at North Dakota that you personally got pretty enmeshed in the local community (charity golf tournament, etc). Did you live there during that time and how did those relationships come about?

I've been in involved in the "kid movement" since my high school years (‘82 graduate of Cascade H.S. in Everett, WA).  I worked for the Boy's & Girl's Clubs of America out in the Seattle area for many years then began the Seattle Junior Hockey fundraising committee. It was there I learned the importance of giving back to the kids. We all have our stories. We all have the choice to either help people or not help people. I chose the former rather than the latter. So, when T.J. was at North Dakota (I lived 140 miles northeast in Warroad, MN), it was a no-brainer to come help the kids of Grand Forks after the support and admiration they had for him. I started the Oshie Sports Celebrity Golf Tournament / Benefit in 2007 in Warroad, then brought it to Grand Forks for 2008 and 2009.

I moved to Grand Forks in the fall of 2007. Other activities I'm involved in is publishing the Minnesota Section 8A Boys Hockey website, coaching hockey, volunteering for Grand Forks and East Grand Forks charitable causes.

We are planning the biggest and brightest event to date this summer in Grand Forks (date TBA in July 2010). This past year the Oshie Celebrity Golf Tournament raised over $4,500 for the GF/EGF hockey programs in name of The T.J. Oshie Hockey Scholarship Fund.

I've aligned with the Grand Forks Park District Foundation to enhance and create more charitable opportunities in the future. I help the Warroad Warriors Boys hockey program, the Seattle Jr. Hockey Association and other various charities. I've donated over $5,000 of my own funds this year to various programs across the USA and volunteered hundreds of man-hours as well.

You told the story about how on Draft Day, T.J. was at home and not in attendance. Did you think he would be a second-day selection? Had you been in contact with many pro scouts to that point? What was that like? 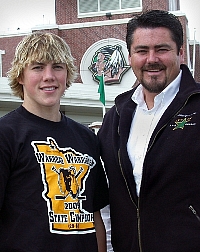 T.J. was actually in Rogers, MN, at Eric Olimb's fathers home. Olimb is a former Warroad Warrior teammate of T.J. and one of his best friends. He was attending the Minnesota Hockey Camp in Nisswa, MN. Tina was at her home in Stanwood, WA. I was at my residence in Warroad, MN.

The National Hockey League only invited the Top 20 projected players to be drafted to Ottawa in an impromptu draft. After watching the past three drafts, I feel it was tough luck T.J. not having a chance to sit in the crowd and wait for his name to be called. But in retrospect, he has always been the kid that really didn't care about pomp and circumstance; he just cared about hitting the ice and having that cold breeze on his face.

After getting the news he was rated 111th overall by the I.S.S. (International Scouting Service) and 43rd for Central Scouting North American skaters, I figured T.J. just getting drafted by a NHL team was a dream come true. I had talked to well over 15 NHL teams from the time of the NHL Combine on June 4, 2005, the day after T.J. graduated from Warroad, until the week of the draft.

Then when I heard the tag, "The St. Louis Blues select from Warroad High School, T.J. Oshie," I jumped high enough to almost hit the ceiling in my living room.

That day will forever be etched as one of the proudest moments in the entire Oshie family existence.

[Send your questions to the coach and have them answered here.]