Five In A Row: Blues Lose In Atlanta

Share All sharing options for: Five In A Row: Blues Lose In Atlanta

I watched today's game looking for a fatal flaw. I wanted to see if there was something I've been missing in the Blues' game that would explain why they aren't scoring enough and in turn, not winning enough. And besides a growing impending sense of doom that started right about the time that a goofy dump-in pass from about 65 feet out hop-skipped over Ty Conklin's glove and into the net to tie the game, I just didn't see it.

Clearly, I'm no expert. I'm not a coach or a scout or even a person who has played the game at any seriously competetive level. I have watched a lot of NHL hockey and a lot of Blues hockey over the years, but still; clearly no expert. And there doesn't seem to be any discernible reason for this extended slump the team is in. they're playing physically. They're getting quality shots on the net. They're crashing the goal. The energy has been there. The goaltending has been there.

It's just an old-fashioned slump.

The problem with a slump is that unless you're Mark Grace, there's no tried-and-true way to bust it. It could happen with a weird bounce in a game (that goes your way for once) or it could come from a weird off-ice incident that loosens up the team and helps them to quit gripping their sticks. It could come from anywhere. Sooner or later it'll happen and the Blues will break out of this funk; they're simply too good of a team to not have it happen. Problem is, we have no idea when it's going to happen. With games at home on Tuesday (Canucks), Thursday (Predators) and Saturday (Sharks), we'd all prefer if it was sooner rather than later.

A few other notes from tonight:

Finally, DanGNR sent this picture from his trip to Atlanta to watch the debacle. We look forward to hearing stories from yet another roadie GT meet up. 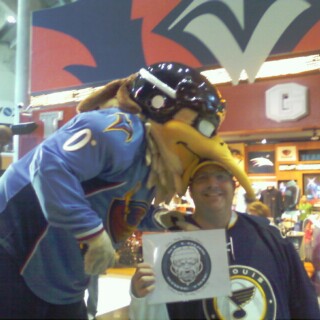