So, is it going to be the Jekylls tonight, or the Hydes?

As frustrating as it is, I guess our team's inconsistency is somewhat better than being consistently bad. We do have our good games, as well, and we're about due for one of those. No better time for a bounce-back game than against the rotten Canucks. It wasn't that long ago that I used to like that team. The top line of Naslund-Morrison-Bertuzzi (before he went full retard) were amongst the tops in the league, and were the foundation for Vancouver's scoring. Trevor Linden was a stalwart on the blueline. I used to listen to their games on webcast radio feeds, as I fell asleep at night, keeping an ear out for my fantasy players. Now, that old guard is gone, and the Swedish Twins are the star forwards. Daniel and Henrik.

God, I hate the Canucks now.

It really came to bear during the playoffs. It's not just that they won, or that they won in a sweep...but it's all the bullshit that they were doing, and getting away with. The behind-the-ref's-back trips at the faceoff, the bringing the wives into the trash talk.... all of it. They are nothing but punks. Talented, sure, but punks nonetheless.

And the Sedins are the figurehead(s) for all of this.

Motivation should not be a problem, here. Our boys know these guys pretty well, after that playoff round, especially. We trashed them earlier this season already, but that was with Raycroft in goal, and he was due for a fall back to the earth. We probably won't get so lucky this time.

The 'Nucks aren't going to be giving anything away tonight. If we truly want this game, we have to take it from them, and keep it, for the full 60 minutes. It ain't over until Kyle Wellwood sings. The Canucks are missing our old friend Pavol Demitra due to injury (who saw that coming?) but are still 4-1-0 in their last 5, and should never be taken likely.

This is also your pregame party. Compare Christmas-shopping battle scars, collaborate to find a web feed, and try to figure out if this is a childhood photo of Henrik, or is it Daniel? 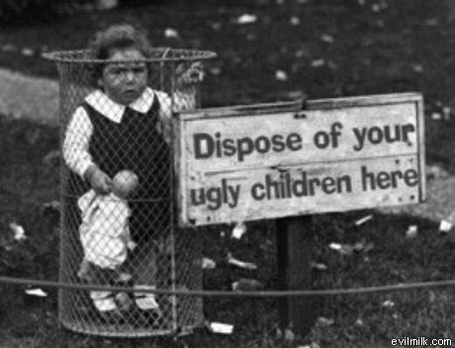 Yeah, it's in a dress.... you don't think they don't still wear dresses now?