The Hockey Prof In St. Paul

Share All sharing options for: The Hockey Prof In St. Paul

The 26th of December brings many things; indigestion, sore thumbs from playing new video games a little too long, nog hangovers, suicide wounds on your wrists after hearing "Grandma Got Run Over By A Reindeer," etc.  But this year it brought something else for yours truly... a trip to St. Paul to watch the Blues play... uh... I know its not the North Stars anymore... hmm... oh well, it's not important.

So, the wife and I packed up the Wagon Queen Family Truckster and hit the road! 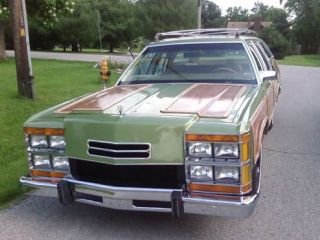 I will not bore you with details of our scenic drive through Wisconsin.  Needless to say, we saw many beer drinking and cheese eating types displaying their great love and affection for the "Green Bay Packers" (a local lacrosse team or something.)

Nothing we saw in Wisconsin prepared us, however, for the sights of St. Paul, Minnesota.  Apparently the city had recently been attacked by the creature Barugon as the city was simply encrusted with ice. 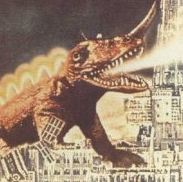 You might have thought an attack by the dreaded pre-historic creature would have made the papers, but even the USA Today kept it quiet.  We parked the Family Truckster behind the St. Paul Memorial Tatoo Parlor and Whore House for awhile just to make sure there would be no counter-attack by the dreaded Gamera, but things remained relatively quiet.

Deciding to risk it, we pushed on to our hotel.  The management at the hotel at first expressed surprise that the wife and I  A) were married, and B) didn't want to rent a room by the hour.  After we assured them we planned to stay the whole night  they asked us to sign a waiver stating we would not bring livestock into the rooms unless we first purchased a licence, available for $15 at the Memorial Tatoo Parlor.  We told them we came to see the hockey game that evening.  They seemed dubious but gave us the room key.

The hotel was quite near the Accelerant Center, the site of the game, named after an important local company which specializes in arson supplies.  We grabbed at meal at the hotel bar (suprisingly edible) and headed for the game.

I must say, my wife looked resplendent in her Harry Ornest styled Blues sweatshirt, while I dazzled the locals in my authentic St. Louis Blues "clown" sweater. 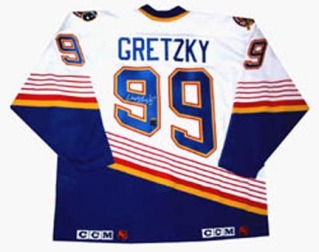 At first I felt sorry for the locals, who I had assumed must have all suffered from some debilitating gastro-intestinal disease (a by-product of the Barugon attack no doubt) as they all looked like they had recently thrown up on themselves.  It was my wife who first noticed that what looked like vomit from afar (and close up) was actually their team's official logo.  As we settled in our seats I found that the Accelerant itself was a pretty nice arena, with the smell of sulphur and gasoline only barely detectable.

And then it was time for the game!  I noticed right away the Blues and the local team had made some "house rules" for the game.  For example, the home team has a player who must be a little bit "slower" then the other boys.  He name was Nolan and the other players let him get a 30 foot head start before they skated after him.  It made him feel normal, and "one of the boys" so I didn't mind it as it was the Christmas season after all.  The Blues would be attacking down at the far end while Nolan would just stand by his own blue line, humming to himself, until the puck hopped his way.  Then he would try his hardest to skate towards the Blues goal, while the Blues attempted to "catch" him.  It was heart-warming.

As for the real game, it was marred by the Blues uncanny ability to suck suddenly.  There they would be going along playing fine, and then BOOM... here comes the suck!  Mostly the suck took the form of bad pinches by defensemen.  (Carlo made such a bad decision at one point I had an aneurysm right there in the arena and died.... I got better.)

Still the lads fought hard, and I did see them score two goals down at the end I was sitting, so that was something.

I left the arena a little dejected as the Blues had been unable to defeat the... um...  vomit logo team, but that is hockey.

This morning I awoke to discover the Family Truckster had been nearly destroyed in the overnight hours.  The local constabulary suspected Megalon, but I found tell-tale signs of wool in the back of the wagon.