This Is How Shit Gets Broke

Share All sharing options for: This Is How Shit Gets Broke

I don't feel like getting arrested, so I try to be cool at the rink. I need my car in the morning, so I try not to drive it into shit on the way home. But once I'm there? Yeah, there's some shit around here that I don't mind living without. And that's the shit that gets broke after a game like this. 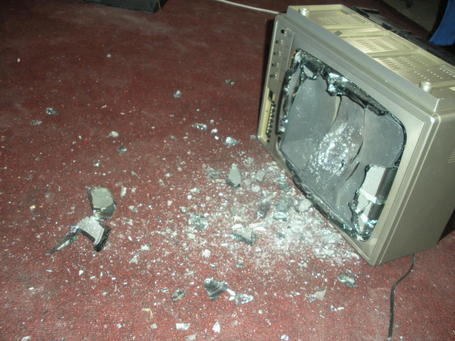 And yeah, I probably care more than I should. But you do too, otherwise you wouldn't be nodding at the screen and clenching your fist.

No pro team should lose a game like that.

And then you shit the bed.

Up by two goals twice in the first half of the game and then leading with nine minutes left in the game and you lose. The whole team playing loose and fast like they're so fucking talented that they don't have to get all gritty and battle for pucks.

Nice work, everyone. I'm glad that a last-place team started to believe the media hype and decided that they're better than they really are. You just gave away two points that you had to have. You're going to miss the playoffs and look back at games like this and be pissed.

But you probably won't go home and break shit in your million-dollar house, will you? No, that's left to those of us who actually, really, absolutely care if you do well or not.

Here's your post-game interviews. Next time, guys, try to pretend like you're somewhat upset and that it's not a matter of 'bad bounces' just not going your way. After all, I'm gonna have to clean up a bunch of broken plastic shards in the morning, at least make me feel like I'm not alone.

Boring-assed Predators on Thursday and the Blackhawks at home on Friday. Can you get up for that?