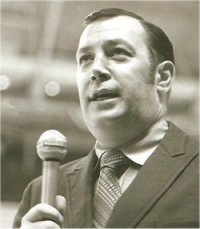 Tuesday was the 20th anniversary of the death of Hall of Fame broadcaster Dan Kelly. He joined the Blues during their second season in 1968-69 and remained behind the microphone until November 1988 when cancer began taking its toll. He died Feb. 10, 1989.

Many younger fans of the Blues probably have heard about Kelly, seen his banner honoring him in the rafters with a large shamrock but might not know a lot about him.

First of all, here's a nice clip that's 10 minutes long but covers the highlights for his first season with the Blues. It includes Red Berenson's six-goal game and the Blues' second consecutive trip to the Stanley Cup Finals. It also starts with the fans at the Arena singing which is pretty damn cool.

Kelly was cut from a different piece of clothe than most of today's broadcasters, even his son John, the current television play-by-play man for the Blues. From the Blues' Web site:

As a broadcaster, Kelly was a perfectionist and a no-nonsense broadcaster. He pulled no punches on the air and off. If a player was having a rough night, he said so. And wasn’t afraid to critique the Blues players face-to-face after games when he’d peruse the dressing room.

"I remember the times when I played and I’d get into a fight," said longtime Blues star Brian Sutter. "Dan would be all over me on the air and after the games. He’d say, ‘you can’t score goals from the penalty box’ and get all over me. Barclay Plager was the same way. But I knew they were concerned about me."

Shortly before Kelly's death, the NHL honored him for a lifetime of service. The following is an excerpt of the obituary the Post-Dispatch ran when he died and was posted yesterday at Stltoday.com:

Last month, the National Hockey League honored Mr. Kelly with its Lester Patrick Award for outstanding service to hockey in the United States. Mr.
Kelly also was named that month to the broadcasters wing of the Hockey Hall of Fame.

In making the presentation of the Patrick award, league president John Ziegler said: ''We have had no greater evangelist, no greater preacher, no greater teacher than Dan Kelly. But for your efforts, but for your loyalty and dedication, there would not be the Blues in St. Louis today.''

This is an opportunity for our veteran readers to share a few stories or memories for one of the most recognizable people associated with the Blues organization in its history. Tell us in the comments.