A Few Minutes with Alex Pietrangelo

Share All sharing options for: A Few Minutes with Alex Pietrangelo

[This interview originally appeared in the Feb. 13 issue of St. Louis Game Time.]

In the last two editions of Tomorrows Blues, your Game Time Prospect Department has been talking with Niagara Ice Dogs coach Mario Cicchillo about Alex Pietrangelo. Tonight, we present a conversation with Pietrangelo himself. 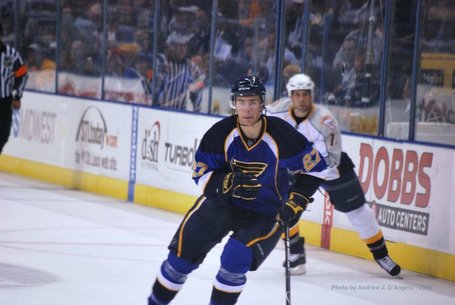 GT: Talk us through the experience of winning the gold medal at the World Juniors. What was that like for you?

AP: There's no better feeling than winning something for your country; it really is an unbelievable feeling. I was lucky enough to spend three weeks with 23 guys that were unbelievable, and we all got along so well. It's something that you'll never forget for the rest of your life, and I'm so happy that I was able to be a part of it.

GT: You had a chance to play against one of your fellow Blues prospects from Sweden, Simon Hjalmarsson. Do you have any specific recollections of going up against him in that championship game?

AP: No, but I'm sure I'll rub it in some the next time I see him. He's a good player, and he had a great tournament, but we were lucky enough to come out on top.

GT: What role were you being used in by Pat Quinn in that tournament?  It didn't seem like you were getting a lot of ice at times, and then other times it seemed as though you were on the ice quite a bit...

AP: The power play really was a lot of my ice time but he worked me in some other times, too. I knew that my role was to fill in a few minutes here and there. I was just happy to be a part of the team, and like I said, it's always great to represent your country.

GT: Would you say that playing on the power play is a specialty of yours, something you really excel at?

AP: Yeah, I usually play a lot on the power play here with my junior team, and I guess my offensive abilities come out on the power play when I'm able to skate with the puck and whatnot. So yeah, I'd say it's one of the stronger points of my game; I also like to kill penalties as well, but a lot of my coaches have trusted me to run the power play.

GT: I talked to your coach the other day, and he had nothing but high praise for you. What's it like to play for a guy like Coach Cicchillo?

AP: Oh, he's a great coach. He's done so well for us this year. We've got such a young team, and we're doing so well, so that goes to show how much he helps us. It's good to have a guy like that at the top that we can listen to, and who knows his stuff. He's a good GM as well as a good coach, too, he's done a great job so far, and I'm really happy to work with him.

GT: You had a spleen injury that kept you out of the Blues Development Camp, correct?

AP: Yeah, last year I ruptured my spleen and I had mono. That kept me out for three months, so that was a lot to overcome.

GT: But you're completely recovered from all that now, and good to go, right?

GT: You started the year here in St. Louis, playing with the Blues in the NHL. Then after you got your feet wet in the NHL a little bit, they sent you back to juniors. What did they ask you specifically to work on, and how did you take being sent back after having a taste of the big time?

AP: Oh, it was disappointing at first, but I had to look at (just being there) as a positive. They had a lot of things for me to work on, like consistency and playing hard every shift. When I'm playing a lot more, it's hard for me to pace myself. So for me, it's just looking at (being sent back) as a positive, that they're looking out for me and my career, and not rushing me, and knowing that they're happy to have me in the organization for a lot of years to come.

GT: When you were up with the Blues, were there any of the defensemen in particular that you stuck close to and tried to pick their brain a little bit.

AP: Well, I played with Jackman pretty much the entire time I was there, so to have a guy of that caliber at my side was an unbelievable experience. I sat beside him in the room, and he taught me a lot while I was there. Hopefully, I can play with him again in the future, and keep learning from him. He's an outstanding player, and he's the kind of guy that a young guy wants to learn from.

GT: You're more of an offensive guy, and Jackman is more of a defense-first player. Were there maybe one or two things that you could tell him out the offensive side of the game?

AP: Well, I don't know if I should be telling him what to do... he's pretty good offensively, too, and just an outstanding all-around player. I'm sure he knows how to take care of the offensive side. It was more me learning so much how to take care of my end; he taught me so much, and I've come a long way just from playing with him.

GT: You've been back in Niagara for a while, playing at a high level there, getting a lot of points and being a leader on your team. How did your teammates, and the community, respond when you came back from the NHL?

AP: They were very happy; all of the fans there were happy to have me back, and my teammates were happy too, and I get along well with all of them. But in the same sense, a lot of the young guys here look up to me because of my experiences and what I've been through. We have a pretty young team, so I'm happy that I could come back and show that leadership to these guys. Like I said, a lot of them do look up to me, so it's great for me that I can kind of show the ins and outs of what it takes to get to the next level.

GT: Coach Cicchillo mentioned that you're very much a leader on this team; do you see yourself in that role as well?

AP: Yeah, I love being a leader, and that's one of the reasons why Mario gave me the ‘C' this year. He trusts me in that role, and I kind of like having that pressure, and that respect from the guys.

GT: Would you say you're more of a vocal leader, a ‘holler guy,' or the kind of guy that just goes out and leads by example, and tells his guys, ‘follow me?'

AP: I'm pretty vocal with the guys; I always have been. But in the same sense, I like to lead by example. A lot of it is vocal; I like to make sure everyone's listening. But I think my experiences, what I've learned over the past year, have helped me to be able to tell them things that I think need to be done.

GT: What would you say is the strongest aspect of your game?

GT: And if you had to pick one aspect of your game that you'd like to work on and improve, what would that be?

AP: Probably my physical play. I've never really been a super-physical guy, but I'm getting better, and a lot of it is just body position and stuff. I think I've come a long way since last year, so hopefully I can continue to work on that and move forward from there.

GT: Because of your size and your build, people have had an expectation that you might be another Chris Pronger for the Blues. Do you see yourself as a Pronger type of player, or is there another defenseman in the NHL that you would say you're more patterned after?

AP: Well, I'm probably not as tough as Pronger, but I probably watch Nicklas Lidstrom a lot more than I do Pronger. The way he plays, I'd really like to emulate that. Those are tough shoes to fill, but that's the style of game that I like to play, and hopefully I can play that style in my career.

GT: OK, one last question... any message you'd like to give to the fans in St. Louis who are anxiously awaiting your return?

AP: Yes; thank you for the time I was there. I really love the city of St. Louis, and I'm looking forward to coming back and hopefully helping the team next year.