When Emmanuel Legace made only five saves on eight shots at Detroit back on Feb. 3, it marked the probable end of his career in St. Louis. He was costing the team points on a regular basis and whispers from the dressing room said his attitude was caustic ever since the team acquired backup Chris Mason. The fact that his understudy was making more money than him was apparently too much to take and Legace was in effect ruined for the Blues. 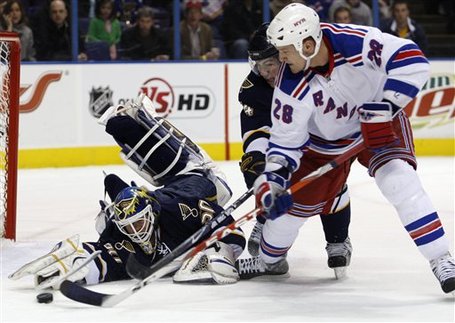 That 4-3 shootout loss in Detroit is the demarcation line for Chris Mason's career in St. Louis. That night he stopped all 13 shots in regulation and overtime before failing to secure the win in the shootout. His performance that night foreshadowed what was to come for the bald-headed goaltender.

Posting a record of 4-1-2, he's allowed 13 goals in seven games. For all the non math majors, that's less than two goals a game. If you add his 13 saves with his totals from the seven games he's started, Mason has stopped 187 of 200 shots, a save percentage of 93.5 percent.

It's not like Mason has been dominating in net. He doesn't have a long list of acrobatic or highlight reel saves. But he's been consistent, a steadying force in net that's at least kept the Blues competitive still mathematically eligible for the postseason. In other words, he's given the Blues a chance to win every single night. Let's look at it game to game.

There's a few conclusions from this relatively small sample size. Mason's only faced 30 shots or more twice, and he won one of those games. So the Blues are definitely keeping the number of shots and scoring opportunities down in front of him. Second, the one game the Blues didn't gather any points for the standings, Mason still kept the team in the game and within one goal before he was pulled in the final minutes. Only in one other game has Mason allowed three goals in regulation.

In other words, Mason is giving the Blues a chance to win every single night. He's giving his teammates confidence. Sure they haven't exactly been filling the net on the other end, Mason has meant they haven't had to.

And that's the point, right? You score as much as you need to win. Why waste a few extra goals and kill all the drama of the end of a game. I mean, who didn't expect the Blues to blow the game Monday night against the Rangers when it was tied 1-1 with less than 10 minutes to play in the third? That's drama, baby.

This performance seems to solidify the Blues goaltending situation for next season, at least in terms of who will be the starter. So commenters, do you think this is the real Chris Mason? Do you have confidence in him going forward? Is this the kind of performance we should expect from here on out? Let us know down below.