A Few Minutes With... James Livingston

Share All sharing options for: A Few Minutes With... James Livingston

A right wing who checks in at a solid 6'2 and 213 pounds, the Halifax-born Livingston is currently in his third season with the Sault Ste., Marie Greyhounds of the Ontario League. A power forward in the making, Livingston has the upper-body strength and strength on his skates to plant himself in front of the goalie and bury rebounds, something he's done with regularity in the OHL. He also has a big shot that he can get off in a hurry when coming down the wing, and his skills have garnered him 37 goals and 78 points in 179 career OHL games. 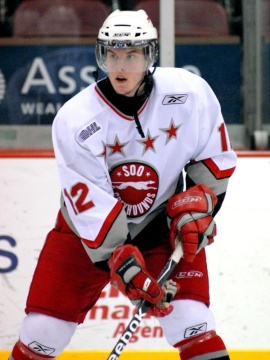 Blues' 2008 third-rounder James Livingston has the size and strength to make an impact in the 'Note as a power forward (Photo by James Egan Photography, courtesy of the Soo Greyhounds).

Livingston's stat line so far this season (as of Feb. 18, 2009) reads 16 goals (seven on the power play), 33 points, 72 PIM in 51 games, which represents a slight drop from the 21-23-44 and 135 PIM he posted in 68 games last season, but he's making up for that by working diligently to improve his footspeed and overall skating. Here's what Livingston had to say about his game, about The Soo, and about the Blues' Development Camp last summer.

GT:  Tell us a little about yourself, your likes and dislikes, and what makes James Livingston tick.

JL: Well, I like music. Growing up, I played a lot of instruments; guitar, drums, piano.  I took French in school, so I'm bilingual.  And every now and then, I like to sing.

GT: Anything in particular?  Were you in a choir growing up?

JL: No, I just sing along when I'm playing the instruments.

GT: Your hometown is listed as Newmarket, Ontario, one of the northern suburbs of Toronto. Were you born there?

JL: No, I was born in Halifax, and now I live in Newmarket.

GT: Where you are now, in Sault Ste. Marie, is quite a distance from the Toronto suburbs. How was that adjustment for you, going from Halifax to Toronto, and then from Toronto/Newmarket out to The Soo?

JL:  Well, I moved to Halifax to Newmarket when I was pretty young. Going from Newmarket to Sault Ste. Marie, well, it's a little colder up here and it's far from my parents, but the town is really welcoming. And it's all about hockey here. So the transition was pretty smooth.

GT: Tell us, if you would, what was your initial reaction when you heard that you'd been drafted by the Blues.

JL: Well, I was extremely excited. I'd been waiting that day, hoping for my name to be called, and when the Blues picked me, I was thrilled. I know that they're a long-standing franchise, and it's just awesome to be a part of that.

GT: Did you have much contact with the Blues before the draft?  Were you aware that they had been scouting you?

JL: I had spoken with their scouts at the NHL Combine prior to the draft; I actually talked to a couple of teams there. So that's pretty much all I knew, was that those teams had interest, and luckily for me, the Blues picked me.

GT: Will you be coming to the Development Camp again next summer?

JL: I hope so; absolutely, if I'm invited.

GT: Tell us a little about the Development Camp experience this year. What are your impressions of the Blues organization, and of the fan base, that you got from the camp, and how does this camp compare to any other summer camps or training camps that you've attended?

JL: It was awesome; it was great to meet the coaching staff, and the facilities in the arena are awesome. The Scottrade Center is extremely impressive, and the fans there were really behind the Blue and Gold (Future Stars) Game, which was a lot of fun. It was a lot like The Soo; it was really welcoming, and the people there seem to really like their hockey. It was really exciting for someone like me, coming in there.

GT: How is the atmosphere there different from training camp with the Greyhounds?

JL: Well, I guess I felt kind of like a little fish in a big pond going through a training camp like that (in St. Louis). There were a lot of awesome, talented hockey players out there. I know my role as one of the younger guys is to go in there and just work really hard, and try to learn from the older guys who had been there before.

GT: At the Development Camp, were there one or two players that maybe you enjoyed competing against just a little more, some of the guys that you'd competed against in the Ontario League? And were there maybe one or two of the guys there that you started to develop a little on-ice chemistry with?

JL: At the Development Camp, it was really all about seeing everything. There were a couple of guys at the Traverse City (Prospect Tournament) camp that maybe I had some chemistry with; well, maybe not real chemistry, but everyone was working so hard together, and things were clicking.

I got to play a little bit with Anthony Nigro, who the Blues also picked last year; we play against each other here in the Ontario League, and we also played together a little bit growing up in minor hockey. We've known each other before, and I got to play with him in the Development Camp, and that was a lot of fun. And Mark Cundari; I was playing against him a little bit, and that was a lot of fun. Seeing all of those guys was awesome.

GT: Tell us a little bit about your game, and your style of play. What would you say are the strengths if your game?

JL: Well, I'm a big, strong guy who likes to go up and down the wing. I can bring some physical play; I think I'm very strong defensively, and can also help out offensively.

JL: Well, I want to work on getting faster. I think that's the biggest thing I'm going to need to do before I make the jump to the next level. So I'm constantly working on getting my footspeed up, and just getting quicker and getting on the puck faster.

GT: Do you find, since you've been drafted, that other teams are maybe paying a little more attention to you on the ice, or is it about the same as last year?

JL: You definitely get a little more respect, just having that (status) of having been drafted, but other than that, it hasn't really changed much.

GT: Are there any of the Blues' players that were favorites of yours growing up?

JL: I didn't get to see that many of the Western Conference games growing up, living in the East all my life, but I do remember seeing Brett Hull and Wayne Gretzky there, so those guys definitely stick out in my memory.

GT: Anything else you'd like to say to the folks here.

JL: Yes; I'm really excited to be a part of the Blues' organization, and hopefully I'll be playing down there soon.