Blues Fall To Columbus. Moving On.

Share All sharing options for: Blues Fall To Columbus. Moving On.

Look, what can you say that hasn't been said already? Yes, the Blues have to stop giving up leads and putting themselves in a position where they have to get fired up and make a comeback attempt.

Yes, they keep things exciting. Yes, we're all tired of them falling just short. Some of that comes from having a younger team. Some of that can be attributed to preparation and being ready to play the second the puck drops. 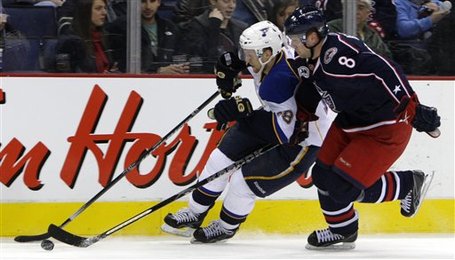 But enough already. A good chance to put this one behind us all quickly because Nashville is on the schedule for less than 24 hours from now.

Instead, here's a long (14 minute) interview with John Davidson. He discusses the trade deadline, the fact that while certain players are nigh-untouchable, no one is truly untradeable because, "Wayne Gretzky got traded."

Nice insight into what he thinks about a lot of the players with a subtle reference to the way coach Andy Murray is handling David Perron by 'pushing buttons' as well as what the players think of the coaching staff.

This is another one of those obnoxious auto-start videos, so you can find it after the jump.