For once, Blackhawk fans and Blues fans can agree on something. 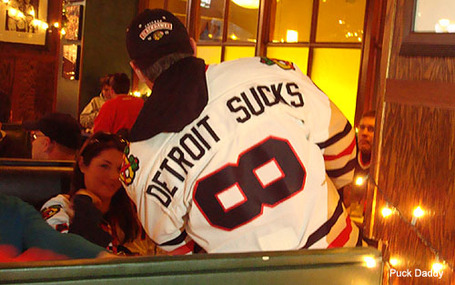 Thanks to Puck Daddy at Yahoo! and whichever commenter was cool enough to post this in a fan shot. And yes, the eight is horizontal, the symbol for infinity. As the No. 1 search return for "fuck Detroit," we endorse and agree with that sentiment.

Emmanuel Legace gets the start in goal to get a little revenge against his former team. Chris Mason had started three games in a row and posted two shutouts, but I guess that's not quite enough to win the starting job.

That's it. Abbreviated intro. Real life stuff getting in the way. The game is on the Vs. bullriding channel tonight. So anyone who has a nice feed may want to post it in the comments for those poor souls who don't get to watch deer hunting every weekend.

And we'll see you in the comments.