Sorry this is late, but I think you know about the Predators. The Blues went down to Nashville Thursday and earned an overtime win. It was sweet. Chris Mason loves to face the Preds. 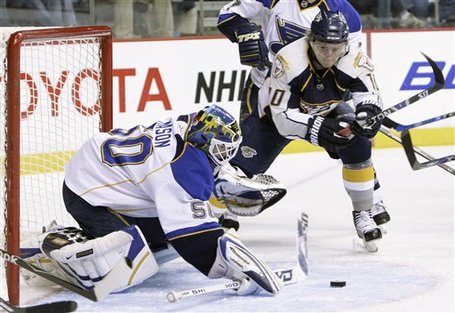 The Blues have to win in regulation against Nashville, a team they've enjoyed playing this season. Mason's former mates have struggled against him. Better yet, the big bald goaltender apparently enjoys playing against them as much as any team in the league. In three games played he's 2-0-1 with a 1.24 goals-against average and 96.4 percent save percentage.

The Blues have a 4-0-1 record against the Predators this season. Quite a contrast when just a few seasons ago the Predators dominated the Blue Note. Upstart pricks are getting it handed right back to them. And it feels good.

If you look at the Predators' Web site, they've declared this much a Fangtastic February. Well it's come back to bite them right in the ass. After starting the month hot with four straight wins, they are 2-4-1 since. Oops.

The brittle and oft-injured Steve Sullivan has been the best player for the Predators this week. Nashville has scored three goals in their last two games. Sullivan has them all. They are the only goals he has scored this season along with five assists in the 18 games he's played this season. His back injury sidelined him for almost two years.

JP Dupont somehow leads the Predators in scoring. I guess without Peter Forsberg and Paul Kariya around, somebody has to lead the team. Dupont has 11 goals and 30 assists. He had two helpers Wednesday night against Detroit, his first multi-point night since Dec. 1. Ouch.

The Preds have a pecker in net, a French-sounding guy leading the team in scoring and a guy whose name sounds like a female country singer as the leader on defense. How is this team one point ahead of the Blues in the standings? After tonight, they might not be.

See you in the comments.