Share All sharing options for: Yan Stastny On Waivers

We don't have a link yet, but the P-D's Jeremy Rutherford has confirmed that the Blues have placed forward yan Stastny on waivers today. Stastny, who had just finished his conditioning stint in Peoria and had been re-called to St. Louis, will likely return to Peoria if he clears. 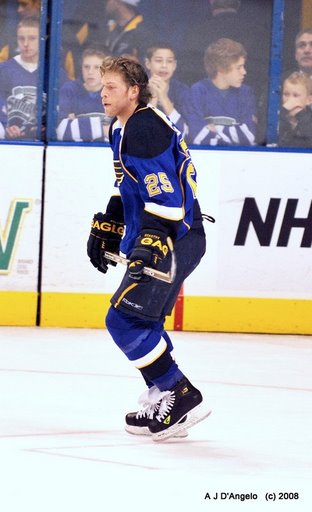 On first impact, I thought this was a questionable move by the Blues. In my mind, Stastny seems like a well-liked teammate and a hard worker on the ice. In my recollection of his season, he had always done the little dirty things out there to make himself useful and chipped in offensively from time to time.

In actuality, Stastny is quite expendable. In 34 games he has three goals, four assists and was a glaring minus-14. On a team that has no shortage of energy line players, Stastny is probably the player who is most likely to slip through waivers unclaimed and be able to help out the Rivermen with their playoff run.

I don't think that this necessarily spells the end of Stastny's career in St. Louis, but if it does, we expect the flags at Chaminade to be at half-staff for the rest of the week.