As The Trade Deadline Approaches...

Share All sharing options for: As The Trade Deadline Approaches...

That's right, everyone, it's T-Day minus 7. The trade deadline is one week from today and for the first time in four years, Blues fans aren't expecting their team to be one of the biggest players in the market. That's right, we're no longer the biggest sellers in the NHL. 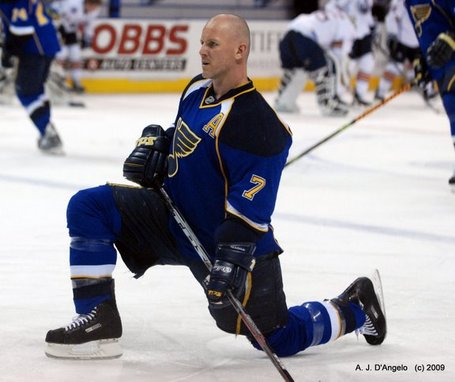 Instead, we get to leave that to the hapless Islanders this year. Which, by the way, does bring back a lot of memories from that horrible, horrible (horrible) 2005-06 season. The Isles look a lot like that team:

The only differences are that the Blues, not the Islanders, get to rent out Keith Tkachuk this year and that Mike Sillinger isn't available this time due to injury. Uncanny, no?

Here on Game Time, you'll be able to follow along all day as we celebrate our third anniversary of skipping work getting legitimately ill and having to stay out of work in order to not infect our non-hockey loving co-workers. And while we're trying to rehabilitate ourselves for a miraculous return to work on Thursday, we might as well jot down a few notes about the NHL trades as they occur, right?

Likewise, SBNation has set up an NHL Deadline Day site that you might as well bookmark. It's also got it's own widget over to your right if you're not the bookmarking type.

Not only will the SBN NHL Deadline Day site update any trades and the reactions of the various team bloggers as they happen, but it's being honchoed by James Mirtle. That's a good thing because even when you hear the New Jersey blogger crowing that his GM ripped off our GM in the completely unmemorable Salvador-for-Janssen trade once again, you know you've got a more measured response from a nationally recognized guy like Mirtle to fall back on.

Looking forward one week, what do we expect to see? Well, the Blues, despite their recent charge slide up the standings, do have a few guys that they might field some calls on.

It's not like it hasn't happened before. The Blues have rented Tkachuk out and then re-signed him in the summer to come back to the place he loves to live and play. 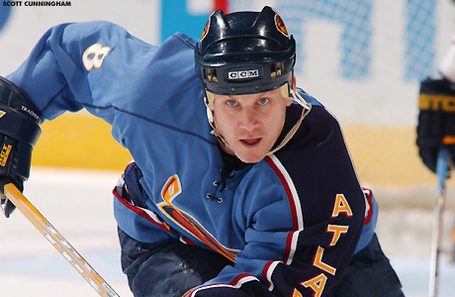 Oof. That is not a good look, and not just because we feel like that jersey is trying to be like four jerseys all at once. Tkachuk deferred to Greg de Vries, who was already wearing No. 7 for the Thrashers and slapped a No. 8 on this powder blue, no, royal blue, no, only on the arms, no, only on one arm and we might as well add the city name down the arm monstrosity. Oh yeah, and a shoelace at the neck. Perfect.

This trade worked out for the Blues only, as the Thrashers were quickly bounced from the playoffs and Tkachuk failed to win a Cup and had to live away from his family for three months.

Would he waive his no trade clause to go through all that again?

Our bet is yes, but only for a very select number of teams. And while we've argued (persuasively, we believe) that the Blues might be better off not trading Tkachuk, it's hard to say no if someone is willing to further bloat the Blues' pipeline of youth and prospects in exchange for his services on a rental basis.

We're guessing that the San Jose Sharks, who are solid all through their lineup, just added playoff guy Claude "Cryptkeeper" Lemieux and were burned once before in a deadline deal with the Blues when they acquired Bill Guerin, will steer clear.

We're betting that the New York Rangers, who looked like they could use a guy like Tkachuk earlier this year and probably even more now, won't make more than a passing inquiry. Just for the record, no thank you, we do not want your underachieving Peter Prucha.

The money bet is the trade we've all been eyeing ever since Boston became an NHL force this season and the Blues slipped out of contention. Here's the basics of why this one makes the most sense:

The best thing the management can do is to get Boston on the hook and then seat the hook with a competing offer that they really don't care to bring to Tkachuk. Get the Rangers or Blackhawks or Blue Jackets to make a competing offer and then lock in the Bruins. Take it to Big Walt with a concurrent discussion about 'what might happen this summer when you're a free agent' and it's a done deal.

And it's the best that you can hope for according to The Office's HR Manual: a win-win-win.

Hinote is another one of those guys who comes to your team and you think, "this guys could be a heart-and-soul kind of guy. He battles, he scores from time to time, he's a leader."

And then he turns into Dan Hinote circa 2008. 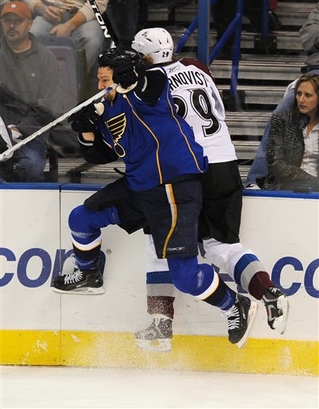 But he still has value around the league. With the Blues chock-full of energy line guys just like Hinote, his leadership and playoff experience and Cup-winning resume makes him expendable. And semi-valuable.

The Blues will likely get a call from someone with little cap room, lots of skill and a desire to add grit to theiur lineup. Trades within the division are so rare, but a team like Detroit could see value in Hinote, a guy who they've battled forever in Colorado and St. Louis.

He won't yield much more than a pick or high-risk prospect, but he could find himself telling his playmate wife to call the realtor next week.

Legace hasn't exactly increased his value in the NHL with his bitter public comments and the fact that he'll tell, literally, anyone who will listen that he hates it in Peoria, but there's always the chance that someone will call the Blues and offer a 'bring him up through waivers and if we get him, we'll flip you something' deal. 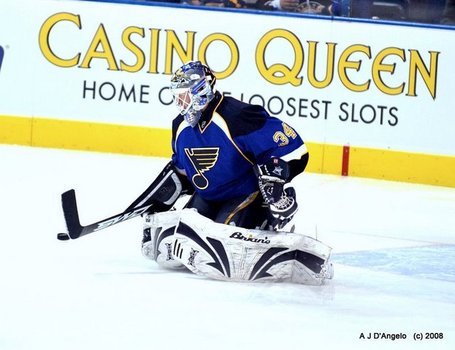 The Buffalo Sabres are on the verge of losing their playoff spot and there are plenty of other teams that see value in having a proven vet waiting in the wings if their starter gets hurt in game one.

But here's the rub: having passed through waivers before he was considered somewhat valuable, he has to come back up through waivers to be traded. If anyone claims him along the way, the Blues are on the hook for half of his salary (no big deal at this point - relatively), but the deal goes to shit.

This is usually the kind of deal where you see one team send 'future considerations' to another. If the Sabres or anyone else are actually interested in Manny and his fragile ego, they may look at the waiver list, see someone who might grab him before they can, offer futures if they let him pass and then snap him up.

Then, on the flip side, they trade the agreed-upon asset to the Blues in return for 'future considerations.' During the off-season, the Blues actually give no considerations (Manny having been the actual historic considerations), while the team that passed on Manny on waivers is given some sort of low-end pick or prospect to complete that end of the considerations.

McKee still has the reputation as a warrior around the league and it's not crazy to think that some general manager will think he can be that gritty shotblocker defenseman that every successful championship team seems to have on theior blueline. 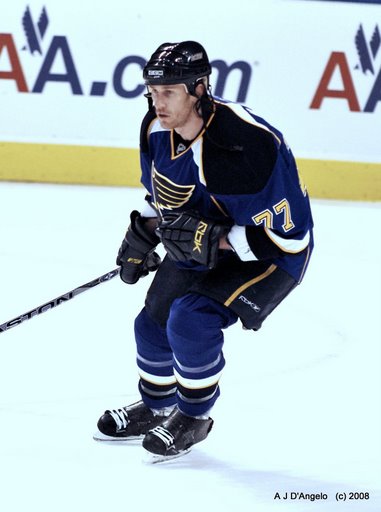 The biggest reason this wouldn't happen is the $4 million he's due next season in the final year of the contract that the Blues gave him to leave Buffalo and come play here. Under the current collective bargaining agreement teams can no longer offer to pick up part of a player's remaining contract, so anyone who acquires Fragile jay is on the hook for the full amount.

McKee, while a useful defenseman, clearly isn't worth that kind of money, especially if your team is up close to the salary cap ceiling, as so many others are. The return for Mckee wouldn't be huge, just as the return for gritty veteran defenseman Bryce Salvador wasn't huge last season.

But if the Blues could move that salary off the books, We're pretty sure they'd do it, especially since McKee will be a third-pairing defenseman next year.

Trade deadline day is always a blast for NHL fans and this year will be no different. The Blues may not have the same level of impact as in the past, but we'll be here analyzing the moves they do make.

Check back, won't you? Your boss probably isn't an NHL fan anyway. He won't suspect a thing.